Aren’t Thursdays great? At least they are in this household – it’s one day of the week (of two) when neither Penelope nor I need to get out of bed at an “early” hour. This week we were still lounging in bed when the doorbell rang. “Who the f**k is that at this time of the morning?” I asked before glancing at my watch to see that it was almost 9.30. As it turns out it was a courier delivering a parcel of goodies. Aren’t Thursdays great?

Thursday week before last we had a “Date Day” and took ourselves off to the cinema again, this time to see The Post with Meryl Streep and Tom Hanks. Very, very good.

Streep and Hanks, of course, are outstanding in their portrayals of Katharine Graham and Ben Bradlee, the owner/publisher and editor of the Washington Post respectively. As you will be aware, it’s all about the theft, leaking and publication of the Pentagon Papers which showed that successive governments had been lying to the American public regarding the war in Vietnam for years. It’s gripping (even though you know the outcome) and the parallels with today’s White House and the vilification of the media make it even more so. Not surprisingly, it reminds one of All the President’s Men with Redford and Hoffman all those years ago and there are several scenes in the Post newsroom which pay homage to similar scenes in the President’s Men. Ironically, the film ends with shots of the Watergate burglars being interrupted and apprehended.

Tuesday was a glorious day and Penelope and I set off for an outing to Stowe Gardens. Stowe is a lovely place which we’ve visited a couple of times before. This visit was especially to see the early emergence of snowdrops which are our first harbingers of Spring. It was lovely but I suspect we were a week or so early – there were snowdrops but not in the abundance I had expected. Still, a brisk stomp around a lovely landscape in lovely weather is probably always welcome. 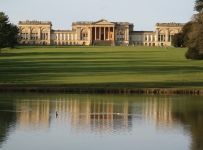 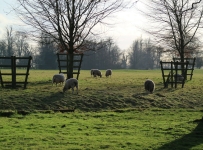 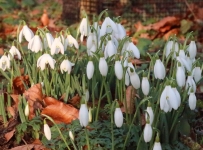 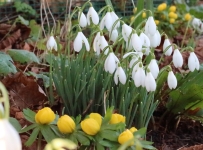 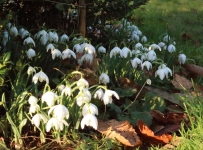 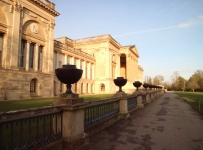 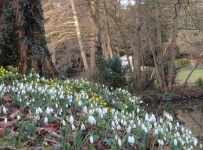 We also had bright clear skies for Wednesday’s Super Blue Moon which was stunning as it rose over Moreton Pinkney. Unfortunately, I was unable to get to grips with the intricate settings on my camera and succeeded only in capturing some photos of a blurry, white blob in the sky. Oh well, at least this one which Sarah shared on Facebook was pretty convincing.

This week the UK press has, as always, been full of Brexit news – the calamitous gift that just keeps giving! Honestly, as I am fond of saying, “You couldn’t make this stuff up!”

Early this week there was a “leak” of some official government documents outlining the anticipated impact of three possible Brexit outcomes. You may remember that David Davis, the minister responsible for leading the Brexit negotiations, had claimed last year that the government was working feverishly on detailed analyses of the Brexit impact on up to 50 different sectors of the economy. When pressed to produce them he then famously claimed, in testimony to a select Parliamentary committee that no such analyses existed after all. (How can you tell when a politician is lying? His lips are moving).

It now turns out there is some analysis, it’s just that the outcome is too embarrassing – in short, the analysis suggests that the UK economy will be worse off after Brexit no matter which “deal” is ultimately agreed. Duh!

The government dismissed the leak because it did not focus on the government’s fantasy of a bespoke Brexit deal. It analysed the three options which are the only ones which realistically exist – crashing out with no deal, negotiating some sort of free trade deal with the EU or remaining in the single market and customs union. As a government spokesperson put it:

An early draft of this next stage of analysis has looked at different off-the-shelf arrangements that currently exist as well as other external estimates.

It does not, however, set out or measure the details of our desired outcome – a new deep and special partnership with the EU – or predict the conclusions of the negotiations.

Once again, a government spokesperson has unwittingly hit the nail on the head – Theresa May and her loony Brexiteers still believe that the UK can negotiate a bespoke agreement, i.e., have our cake and eat it. In other words, getting a better deal than we currently have. The EU has reiterated again and again that simply won’t happen. Nor could it ever happen – other countries would want a similarly “good” deal. I wonder when (if ever) the penny will drop.

On Thursday this week there was another leak from the same report, this one about the impact of the Brexiteer’s loony views on immigration.

The report concludes the strict new immigration policy favored by May after Brexit would further damage the U.K. economy — and would far outweigh the benefits of signing a free trade deal with America.

Folks have been saying this since before the referendum so it’s hardly surprising that an official government summary of the impact of leaving the EU would mention it. Yet the government continues to insist that the UK will thrive outside the EU.

And, as if the situation could be any worse, there is more from the You Couldn’t Make It Up Department: highly skilled immigrants to the UK, doctors, engineers, IT professionals, teachers, etc., are being denied indefinite right to remain in the UK at precisely the time when the UK is suffering a shortage in exactly those areas.

You couldn’t make it up.

And finally, not that I am one to boast, but the bread baking cloche Father Christmas brought me this year goes from strength to strength:

Yes, it is as good as it looks.

And finally, finally, when I visited my mother last Thanksgiving I took away with me a bundle of old photographs and a couple of photo albums. I finally got round to scanning some of them this week. How about this delightful group of youngsters – me, my sister Susie, my sister Sallie and my brother Sandy in probably 1956 at my father’s aunt Lucy’s in Pacific Palisades. We’re clearly dressed in our Sunday best and hopefully were on our very best behaviour!