Oh my goodness! Another great week with lots of fun, lots of work and lots of pretty decent sunny weather. We had Bubble for an overnighter, we enjoyed a wandering supper as well as a date night overflowing with culture while, in between, toiling in Penelope’s woodland garden. And we enjoyed a gloriously sunny version of the longest day!

Last Saturday we had a partial conflict – our social calendar is that busy! Saturday was the date of this year’s Wandering Supper around the village. Various households offer to host a dinner or a dessert course for six to ten people. All the names are thrown into a hat and the organisers draw them out to determine who goes where. Husbands and wives are split up so that one gets to meet a wide range of villagers. Afterwards there is a gathering in the Village Hall for post-dinner liqueurs and coffee.

Penelope and I were split up anyway as we had the ever-delightful Miss Annabelle for an over-nighter while her parents went to a party. So, the arrangement was that I would go for a dinner course somewhere, return home to take up the babysitting duties allowing Penelope to dance off to dessert somewhere. Although I am much more a main course than a pudding person, I still drew the short straw, I reckon, because Penny got to attend the post-dinner libations in the Village Hall and she didn’t stumble in until midnight! “Sure had a wonderful time last night, least ways they tell me I did! “

Tuesday evening we had a date night in Bicester of all places! There was an NT Live Encore broadcast of Macbeth and, as we hadn’t seen it first time around, we took ourselves along to the Bicester Vue cinema for the presentation, prefaced by a dinner beforehand in an Italian hostelry just close by. I don’t know how we missed it first time around – we must have been away and we sure were glad they did an encore.

The performance was outstanding and the production was absolutely fantastic. Rory Kinnear was Macbeth and was astonishingly good, well-supported by an equally astonishingly good Anne-Marie Duff as Lady Macbeth. I have to confess that Macbeth is not one of my favourite Shakespeare’s but this performance simply flew by and had us on the edge of our seats for the duration.

Lady Penelope’s front garden continues to inspire and impress. The roses continue their full-on assault on one’s senses – they look great and smell divine – and the lavender is coming into flower with its fragrance as well. Meanwhile, a few miles down the road there is a flax/linseed field which is just in flower. Flax is one of our all-time favourites to see in the fields but it is little grown these days. I’m sorry but the photo doesn’t do it justice – the delicate blue of the flowers melts into the bright blue sky on occasion. 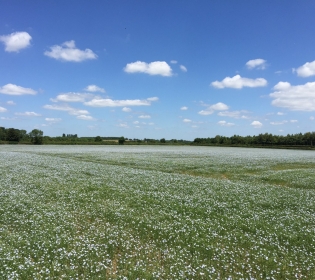 The Brexit nonsense this week hit an all-time low – two important votes in the House of Commons where there was a real danger of enough Tory rebels voting to defeat the government. In the end, though, the rebels backed off after receiving “assurances” from the Prime Minister, assurances which were shredded as soon as the vote was passed. Again, sadly, loyalty to the Conservative Party deemed to be more important than loyalty to the country. As an aside, Penelope and I were off yesterday to join a march in London demanding a second referendum (more of which next week).

A couple of things caught my eye this week. First of all, I loved this cartoon from The Other Coast by Adrian Raeside:

For some reason that just tickled my fancy.

Secondly, a friend posted this on Facebook the other day. At first glance, I was sure it was “fake news” as I had no idea that Dr Seuss produced any political drawings. So, I did a bit of investigation to discover that it is, in fact, genuine. Apparently, he produced a number of political cartoons; he drew this one in October 1941 when he was the chief editorial cartoonist for the New York newspaper PM.

Now we know where that slogan comes from!