Goodness! Another great week. The weather continues to be sensational, hot and sunny with temperatures into the low 30s (i.e., the mid 80s). We’ve not had any rain for about six weeks so, as you might imagine, the garden is desperate for a drink. Thankfully, no hosepipe ban in our neighbourhood yet but the first of the season has been introduced in Northern Ireland. Since we had such a lousy Spring here with lots of rain and low temperatures, the reservoirs are full, so they say. At the same time, since the privatised water companies are estimated to lose up to 30% of their product through leaking pipes it probably won’t be long. After all, it’s much more important to maintain their shareholder’s dividends than to actually fix the infrastructure. Aren’t privatised monopolies a great idea!

Did I say it has been hot?

The big news this week is the arrival of Adam, Ava and Jessica for what they hope and anticipate will be a permanent move back to the UK. They arrived on Friday evening after a lengthy trip from China and are slowly finding their feet. We’ve been able to organise the far end of the house (for those of you who have stayed in our magnificent “Guest Wing”) so that they pretty much have their own space. No idea how long they will be with us – until they get settled somewhere – but it’s grand to have them back. I wonder how we’ll cope with a two-year old in the house again?

I am finally able to perform the “grand reveal” of the project Ms Playchute has been working on for the past several weeks. We’re calling it Wood End and it is the magnificent conversion from a waste land into a splendid shaded/wooded area at the very top of our garden. Now that the bench is in place, it’s a very pleasant area to sit with a glass of wine and contemplate all that is well with the world. 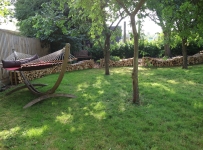 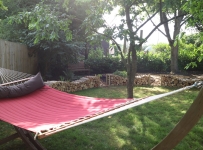 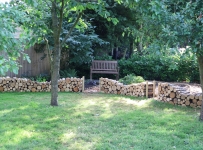 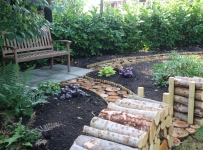 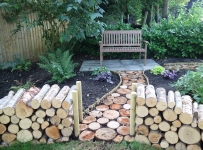 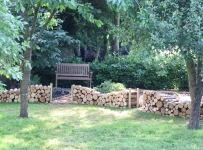 I’m writing this on Friday so it’s too early to feed back on what will almost certainly turn out to be a bun fight at the cabinet “Away-Day” at Chequers (the Prime Minister’s country residence). Two years after the Brexit referendum, the government is finally going to sort out what kind of relationship the UK wants with the EU going forward and all those who voted to Leave the EU will finally discover what they voted for. Sadly, what is being proposed seems unlikely to please anyone but it’s been said all along that the EU would never allow the UK to leave and yet still retain all the benefits that membership brings. (Un)fortunately, it could all get very ugly with several “big beasts” threatening to flounce out of the government. (Since this all happened last Friday you will be able to judge for yourself).

Stop Press: Sadly, no big beasts have flounced out of the government (yet – it could still happen) but the shape of the agreement negotiated will be very difficult for the looney Brexiteers to swallow. It seems the gist of the future relationship the UK proposes will include:

(a) a commitment to continue to follow EU rules for all goods, including agriculture.
(b) a so-called Facilitated Customs Agreement whereby the UK would apply its own tariffs on goods destined for the UK and would also collect tariffs due on goods for the EU and then pass the amount collected on to the EU.

We’ve no idea (yet) on whether the EU will accept this position but whatever, it’s a far cry from “Taking Back Control” which was the mantra of the Leavers. It compells the Uk to (a) continue following EU rules without (b) having any say in how they are drawn up. And, it commits the UK to be a tax collector for the EU.

Since the UK has already agreed to continue paying billions to the EU after Brexit (due to ongoing treaty obligations and the so-called “divorce” settlement) it’s clear that the Leavers will have been duped if this plan succeeds. Indeed, it’s the worst of both worlds – in the club but without any rights to shape the future. Marvellous.

And while on the subject, there have been dozens of very clever metaphors for the calamity that is Brexit but I ran across one of the best in the Guardian last Sunday. James Acaster, a stand-up comedian, described part of his routine which makes Brexiteers very angry, apparently.