Another good week! After a bit of rain on Sunday it’s back to “normal” – hot, hot temperatures with a bucket-load of humidity thrown in just for fun. The lawns and garden enjoyed the sip of water but there really wasn’t enough in our neighbourhood. Some areas got a deluge while we had just a short, gentle drizzle.

We had a great time at Nick & Lucy’s on Sunday. Sadly, there was no naked dancing but also no water fights in the garden due to the drizzle. Still, Jessie and Annabelle enjoyed themselves and it did dry up a bit in the afternoon and a stroll down to their local children’s playground at least got us out of the house for a bit. I don’t think the girls would have cared one way or the other – they had a blast!

We received the entry form for this year’s village show in September on Monday. You will remember that Penelope won lots of prizes for her fabulous vegetables, not to mention her caramelised onion tarts, and I won a prize for my “award winning” sourdough. Naturally, I look forward to defending my title. If this week’s effort is anything to go by, however, I’ve got a lot of work to do!

I had started the two day process for the production of my latest loaf when I was reminded that we were going to be out all day on Tuesday in Oxford. So, I put the starter in the refrigerator to postpone the fermentation process so that I could bake on Thursday. That part went well. The part that didn’t go quite so well was removing the starter from the refrigerator and attempting to carry on from where we had left off. No energy, no excitement (and that was just me, never mind the sourdough). I ended up producing one of the most solid bricks I have ever managed – it will be a useful doorstop for months to come.

We spent the day in Oxford on Tuesday – Ava had to attend an interview to be granted a National Insurance number which will enable her to work. It was interesting to observe, almost first hand, the extent to which various parts of government who are supposed to have a handle on these things, clearly do not communicate with each other. The left hand not knowing (or perhaps not caring) what the right hand is doing. It was also interesting to note just how pervasive the policy of “Hostile Britain” has become since Theresa May became Home Secretary in 2010 and now Prime Minister.

In order to get her visa to come to the UK in the first place Ava had to provide documentary proof of her marriage to Adam and to persuade the visa officials that this was not a marriage of convenience. Having proved that to the Home Office’s satisfaction, she was granted her visa which clearly states that she is allowed to work and to access the NHS.

Apparently, that’s not good enough for those charming people at the Department for Work and Pensions. So, Ava had to jump through all the same hoops again, this time to be granted a National Insurance number. They could have saved everyone’s time by simply asking to see her visa and take what the Home Office had said as true. On the other hand, I suppose it keeps someone in a job.

As we were in Oxford it didn’t take much persuasion to find some opportunities to enjoy ourselves and boating on the river was just the ticket on a hot, sunny day. Normally, when we go punting we go from the Cherwell Boathouse which is to the north of the city centre. However, since we were in the centre of town we wandered along to Magdalen Bridge where one can hire pedalos or rowing boats as well as punts.

The place was packed with every foreign tourist in the city and all twenty-three thousand foreign students queued up waiting for river transport of some description. Fortunately, most of them were not after a punt so we were able to get more or less straight on the water and enjoyed a gentle punt along the very crowded waterways. I think we’ll go to the Cherwell Boathouse next time. 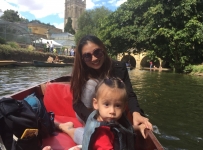 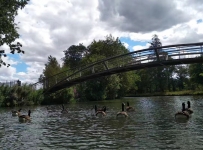 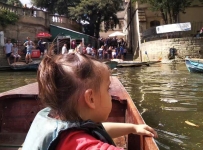 On Wednesday we had a “play day” with Lucy and Annabelle which was a lot of fun. A Children’s Play Village recently opened in Warwick and Lucy had arranged for us all to go for the morning. The place consists of a “Main Street” with about a dozen “shops” and other facilities, each complete with props and dressing-up costumes. The children wander around and flit in and out of whichever establishment takes their fancy. There was a supermarket, an accident and emergency centre, a school, theatre, post office, veterinary surgery, tea room and beauty salon, a fire station and, what every High Street needs, a construction site. I guess there were about twenty or thirty kids ranging from a few younger than Jessie up to about eight or nine years old. My personal favourite bit was the school room where teacher Annabelle put Lucy and me through our paces. Fortunately, there were no smacks for getting the wrong answer!

On Thursday Annabelle came for an overnighter which delighted Jessica. She and Annabelle have become the absolute best of friends (well, at least as far as Jessie is concerned). Annabelle is delightfully sweet with her and Jessie simply loves her grown-up older cousin. Lucy brought Annabelle over in the morning and they all set off for a swim at the leisure centre in Banbury followed by a romp around the children’s playground in Spiceball Park. Back home again and it was time for a nap (for Jessie) which was followed by a stroll down to the brook at the bottom of Brook Street for some splashing about and filling of Wellington boots with water. By the end of the day we had two very tired young people (and more than a handful of very tired adults as well). The look on Jessica’s face on Friday morning when she discovered that Annabelle was still here was priceless. 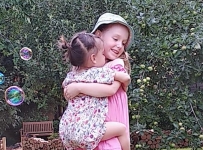 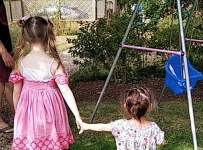 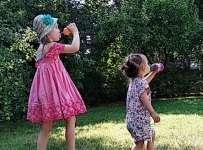 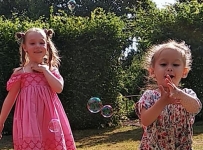 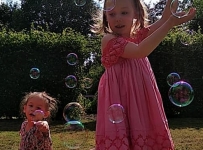 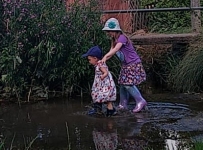 Finally, I came across some great travel photos in the Guardian this week although I was not entirely convinced by the winning entry.