So now we know. Or, now we know a bit more than we knew before. But we still don’t know. What we do know is that the EU has given the UK until the end of October to come up with a credible plan to leave which can squeak through Parliament. What we still don’t know is what that credible plan might ultimately look like nor whether we shall be given another opportunity to vote on the plan, once we know what it looks like. An absolute shambles. I have to say, though, the new leaving date is an excellent metaphor – do you think the EU is having a joke? The first date was near enough April Fool’s Day; the new date is Halloween – Trick or Treat?

Three years down the road, three years to sort this all out and the government is still kicking the can down the road in the hope that somehow, someway they can get something through without ripping the Conservative Party apart. John Crace summed it up:

We’ve reached the point where inertia is now everyone’s safe state. It’s the thought of the government actually doing something that is really terrifying. Because you know if it does then it will screw things up. The first law of clusterfuckery.

It’s difficult to judge whether UK or US politics is more dysfunctional at present but whichever, Putin must be laughing his socks off. And, to prove the point, the following was in the latest issue of Private Eye:

We’ve had some really lovely spring days as well as a couple of dreary, damp, dismal days mixed in just for fun this week. Ms Playchute has made good progress on her garden and I, at least, have not been too much of a hindrance. I gave the lawns their first serious mowing of the season and the orchard is blooming. We’re often away at this time of year so it’s a real treat to witness the blossom on the plums, apples and pear trees in the orchard. Beautiful.

We also had a chance to pop out to Coton Manor early in the week to acquire more plants for Penelope’s Woodend Garden. It was a lovely day and the blossom on the trees there was gorgeous. I am not convinced, though, that this is an efficient or economical way to acquire more plants. Firstly, you have to pay to go in even if your only intention is to buy some plants. Then, because it’s just about lunchtime when you arrive, you have to purchase a coffee and perhaps a tasty bit of quiche (broccoli and stilton). And then, you choose your plants and pay for them. All in all I guess each plant cost about £20! But, Woodend is looking lovely, I have to confess. 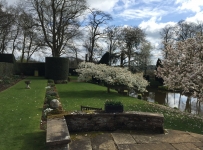 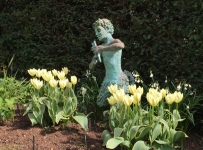 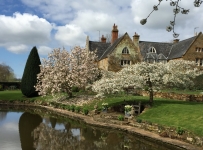 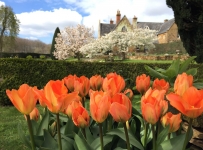 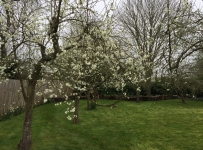 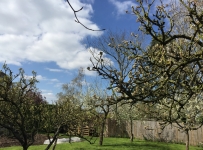 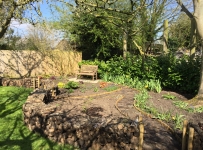 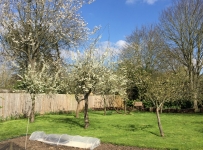 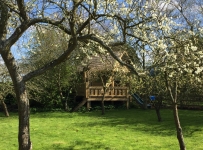 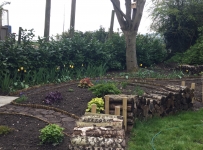 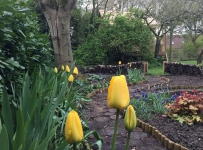 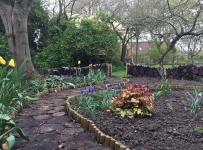 Thursday evening was “date night.” There was an NT Live streaming of All About Eve which was excellent. Gillian Anderson played the role of Margot Channing, the aging star, and Lily James played Eve Harrington, the young usurper. Both were outstanding.

As usual, we were late deciding that we would go and when I came to book tickets I found that (a) it wasn’t on in Banbury and (b) the Northampton cinema was sold out. So, off to the cinema in Bicester we travelled and it was packed. Clearly Banbury is not the cultural hotspot that Bicester and Northampton appear to be!

I vaguely knew the story beforehand but not much else – I don’t think I’ve ever seen the 1950 film. Margot Channing is a tired, aging, jealous actor concerned about her advancing years and the roles she will be able to play in the future while Eve is a bright young thing who is, ostensibly, a huge fan. Gradually, however, it becomes clear that Eve is deceptive and manipulative and she works tirelessly to usurp Ms Channing’s position and become the star herself.

I ran across the story earlier in the week about the death of Bill Heine, the guy who installed the Headington Shark. It’s a truly wacky spectacle and has entertained and amused countless visitors who have run across it. Not surprisingly, when it was installed it caused quite some controversy. The local council insisted that it be torn down but the owner appealed and eventually won his case.

And finally, I guess you all saw the first ever image of a black hole which was revealed this week. And the young student whose algorithm made it all possible. An astonishing story.

Not only are black holes are so small, dark and distant that observing them directly requires a telescope with a resolution equivalent to being able to see a bagel on the moon but also, the success of the project hinged on clear skies on several continents simultaneously and exquisite coordination between the eight far-flung teams. Observations at the different sites were coordinated using atomic clocks, called hydrogen masers, accurate to within one second every 100 million years. And, on one night in April 2017, everything came together.

Two years and enormous amounts of computing power later and we have “seen” the seemingly unseeable. I wonder, though, if some sceptics might take the same view of this breakthrough as they did of the moon landings.

I thought this was cute.

Although Penny hasn’t said anything similar to me so far, I suspect she will have said it to herself dozens of times.