Oh my goodness, have we been busy! It’s been a great week.

Last Saturday Pen, Nick and Lucy and I trotted off to London to cash in a Christmas present – an outing to Hamilton at the Victoria Palace Theatre. We’d been up in town to see Julius Caesar just before Christmas and afterwards Pen remarked that she quite fancied seeing Hamilton. So, I tucked that information in my memory bank and, astonishingly, remembered to do something about it.

It was a gloriously sun-shining day and we meandered up to town, had some lunch and walked just around the corner to the theatre. To say we enjoyed it would be doing a disservice to the general concept of “joy”. We all four loved it!

The music was terrific and the choreography sensational. They employed a very simple set which transmogrified seamlessly into whatever was required. It was a non-stop, foot-tapping, bright and vibrant spectacle which well-deserves all the hype it has had. A really fine day out.

Saturday also happened to be the day that Ben, Brex-Anna and Max the Magnificent arrived for a visit. Unfortunately, as we were up in town they had to make their own way to Moreton Pinkney where Adam, Ava and Jessie along with Annabelle were waiting to welcome them. They put their collective heads down for a bit of a rest and, as soon as the show was over we raced back to the train station and caught a fast train home, arriving back at about 7.30 where Adam & Ava had supervised the preparation of an excellent evening meal to welcome the travellers to the UK.

Ben, Brex-Anna and Max’s arrival coincided with some outstandingly excellent weather. Temperatures nudged into the low 20s on Easter Sunday and Monday, not surprisingly breaking all sorts of records for the hottest Easter since records began, etc., etc. Good job the Extinction Rebellion protestors were in London to remind us all of the urgent need to do something about climate change.

Nick & Lucy were busy on Easter Sunday so our jet-lagged visitors hung about and tried to recuperate to some extent. Then, on Easter Monday we all made our way across to Nick & Lucy’s where we indulged in all our favourite Easter festivities. Jessie was introduced to the joy of the Easter Egg hunt and participated with gusto! Bizarrely, however, this child is not the least bit fond of chocolate so chocolate Easter eggs, a treat for most young children, would have been wasted on her. Currently, she is going through a period of great enthusiasm for dinosaurs so Lucy very cleverly stuffed her plastic eggs with little dinosaurs, most of which she accurately identified as she opened them. ( An aside – she is astonishing – she has a board game, Dinosaur Bingo, with little cards with pictures of about 48 dinosaurs (who knew there were so many). So far she can instantly name about half of them which is about twenty more than I can remember).

Tuesday, the last good day of the week, we decided to make our way to Twycross Zoo. It’s been many, many years since we last visited (Adam was in primary school and they were working on a monkey project – at the time Twycross had a decent selection of monkeys and penguins but not a lot else, as I remember). The zoo has expanded and developed quite extensively since them and has a pretty decent collection of animals. One always has some mixed feelings about visiting zoos – it’s a shame that we keep wild animals in such relatively confined spaces for our own amusement and entertainment. However, Twycross and other zoos do good work in developing conservation and breeding programs without which many of these animals would probably be lost forever. 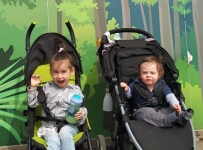 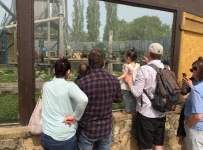 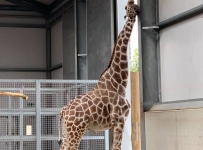 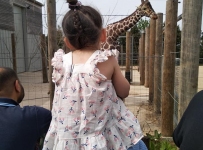 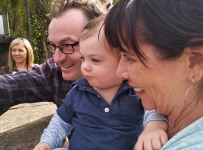 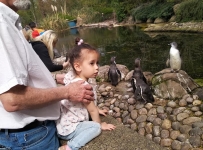 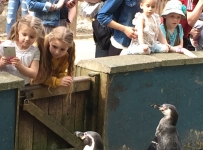 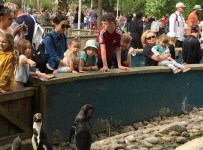 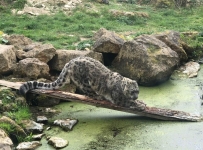 Regrettably, our great idea to visit the zoo was similarly entertained by about 57,000 other folks and their children and the place was packed – an absolute zoo!

Wednesday the weather turned and we had to plan our outings in a way which would enable us to dodge the showers. Late in the afternoon it cleared up (marginally) and we set off to inspect the state of the bluebells. We were a bit early but there was still enough colour to give everyone a taste of their beauty – we’ll have to go again in about a week, I think. 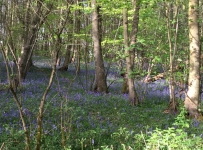 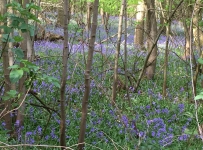 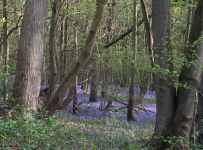 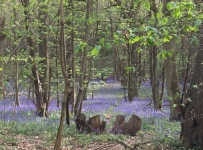 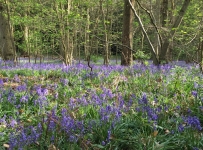 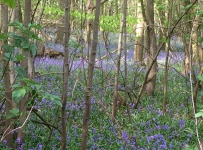 The builders have cracked on apace while we’ve been out and about enjoying ourselves. We now have a wall which has some holes for windows!