We had some glorious weather early this week – just what Spring in England should be all about. Warm(ish), sunny with bright blue skies and a slight breeze. Very pleasant. It returned to form toward the end of the week with cooler temperatures, more breeze and even the occasional spot of rain. Hey, ho – I guess we’ll call it a draw.

On Tuesday Pen and I went up to London to visit the Royal Academy exhibition of Renaissance Nudes. I was expecting and hoping for some hard core pornography but I was sadly disappointed. Nothing like the stuff from Pompeii!

There were some lovely paintings and etchings all of it exquisitely and “tastefully” done. In some wisps of a light diaphanous fabric drift down the body of a beautiful woman to shield us from anything unsightly.

There were a few that drew a chuckle in their absurdity. Rather like some of the stuff from Pompeii, one was an etching of a man approaching a coy young woman sporting an enormous erection. Well endowed to say the least!

[Having just looked again at that last paragraph it reads as if the coy young woman was the one sporting the enormous erection. Now that would make the Pompeii stuff seem tame but, alas, ’twas not the case – the man was sporting an erection that would surely qualify him for entry into the Guinness Book of World Records.]

There was also a tiny wooden carving of an old woman bathing, with wrinkled flesh and a tired, drooping breast. They were so realistic in the Renaissance!

All of it good fun and most enjoyable. And, it’s always a treat to meet up with friends and spend the day in the hub-bub of the city, no matter what the occasion.

John Crace had a cute snippet in Friday’s Guardian about the astonishing achievements of Chris Grayling.

One person wisely keeping a low profile is the disaster-prone transport secretary, Chris Grayling, the only cabinet member with lower poll ratings than May. During his five years in government, it is now estimated Failing Grayling has cost the country the best part of £3bn. Just imagine: the UK would have been £2bn better off by paying him £1bn to stay at home where he could do no damage. That’s two new hospitals we could have had for the price of Grayling mowing his lawn.

I would certainly be happy to be paid £1bn to stay at home and mow my lawn but so far I’ve not had any response to my offer to take his place in government. Heck, I would even do it for a mere £500m.

It is extraordinary – through his incompetence and arrogance he has cost the country nearly £3bn but I guess he will be best remembered for awarding a £33m contract to run ferries across the channel in the aftermath of Brexit to a firm which had (a) no experience of ever having run a ferry service and (b) no ferries. Their expertise, for which they were granted the multi-million pound contract, was that apparently they had once organised the delivery of some pizzas. I keep saying – you could not make this stuff up!

I guess you all saw the depressing news of the discovery of plastic litter at the bottom of the Mariana Trench?

The building work continues. We now have two of the three steel joists in place and the roof should start taking shape this week. Also, Ms Playchute has finished chopping, smashing and digging the borders around the new patio and on Friday was able to carry out the initial planting. It looks great and we look forward to many a happy barbecue and/or glasses of red wine while dining al fresco. 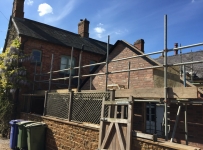 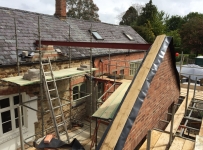 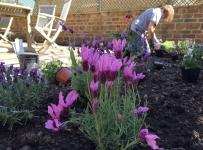 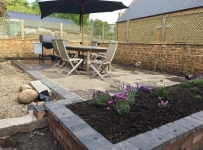 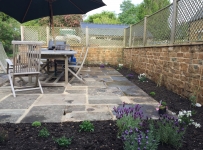 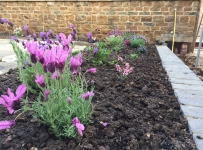 And finally, the following appeared on my New Yorker desk calendar in the week. Although she is dealing with her Facebook addiction and has been much better in recent weeks about not being sucked into the nonsense that is much of what appears on the platform, I couldn’t help but think about Penny when I saw this.