Welcome back after a couple of outstanding days in St Ives, Cornwall. We absorbed lots of culture, enjoyed some magnificent sights, walked a bit and ate a lot – what more could anyone want from a short holiday break?

Penelope and I had never been to St Ives – it’s a long, long way down the Cornish peninsula, almost as far as one can go without falling off the end. We’ve been to Cornwall several times previously but always to the south coast. This was a real treat.

Like many Cornish seaside towns, St Ives was largely reliant on fishing back in the day. Dozens of small seine fishing boats would bob about in the bay outside the harbour and scoop up pilchards by the millions. The movements of the boats were guided by observers up on the hills overlooking the bay who would spot the signs of fish and direct the boats with flags and signals accordingly. At its height the fishermen of St Ives exported something approaching 200 million pilchards each year to Italy – that’s a lot of fish. No wonder the fishing industry has declined!

In the early 20th century St Ives became a magnet for artists partly due to the magnificent light but also because it was a long way from London and hence was amenable to a more avant-garde lifestyle. It became home to Bernard Leach and Shōji Hamada who established the Leach Pottery in 1920. The Cornish artist Alfred Wallis and Ben Nicholson and Christopher Wood met at St Ives and laid the foundation for the artists’ colony. In 1939, Ben Nicholson, Barbara Hepworth and Naum Gabo settled in St Ives, attracted by its beauty. In 1993, a branch of the Tate Gallery, the Tate St Ives, opened. The Tate looks after the Barbara Hepworth Museum and her sculpture garden. The town also attracted various artists from overseas including Piet Mondrian.

We stayed in a cottage on the appropriately named Fish Street just a moments’ stroll from the harbour in the heart of the old town. Lots and lots of lovely narrow streets and old fishermen’s cottages – charming and delightful to stroll through but a nightmare when driving. Fortunately we escaped with no scrapes to our car nor any lost wing mirrors. Some of the turns, though, required not a three-point turn but rather something approaching a twenty-three point turn.

The area is surrounded by gloriously gorgeous broad expansive white sand beaches and, although it was a bit chilly, there were still a handful of surfers and children paddling in the sea. On our first full day we took the train a couple of stops down the line and walked the four miles back to St Ives along the Coastal Path. It was a lovely sunny day and apart from one or two other walkers (including a mad bird watcher with a broken leg on the trail of a sighting of a Royal Tern from the Caribbean) we had the whole coast just about to ourselves.

One of the attractions of St Ives is the Tate St Ives, one of the four Tate galleries in the UK. The Tate houses an outstanding collection of abstract art, which although it is not my particular cup of tea in general was well worth the visit. There’s always something to raise a smile or two.

The Tate is housed in a marvellous building right on the coast with magnificent views looking out over Porthmeor Beach. From the outside it looks relatively small and unobtrusive. Inside, however, the galleries seem to go on and on, the bulk of the gallery having been built back into the hillside.

After the Tate and an outstanding lunch at the Porthmeor Beach Café we wandered across town to the Barbara Hepworth museum, the former home and studio of the sculptor. The garden has a number of her pieces, large grand solid works of stone and steel. 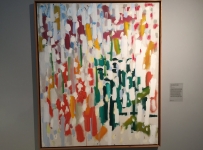 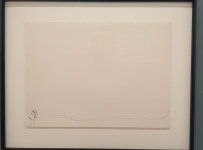 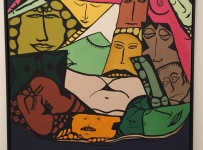 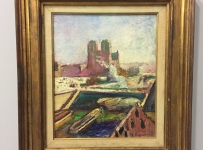 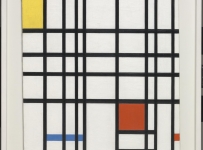 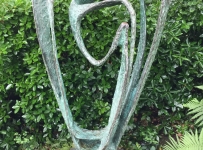 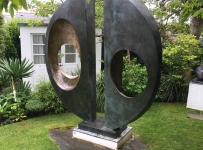 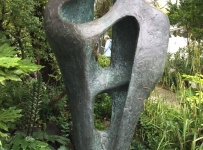 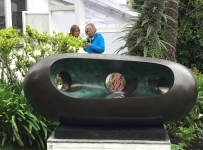 Naturally, eating is always an essential part of any holiday and in St Ives I was in my element. Everywhere we went there was an abundance of fish and other seafood (although the mussels were “off” due to an algae bloom). No matter, there was an abundance of clams, scallops, crayfish, squid – more than enough to keep me well and truly stuffed. Unfortunately, such sea creatures are not on Penelope’s list of favourite foodstuffs but there was plenty of fish and a substantial array of vegetarian and vegan fare (as one might expect in an artsy-fartsy community). I don’t think any of us went hungry.

On our last full day we travelled across the peninsula to the south coast (about eight miles) to visit St Michael’s Mount. This has long been on my “to do” list (as is its “cousin” Mont St Michel in France).

St Michael’s Mount is a small tidal island a couple of hundred metres off the coast. It is linked to the mainland by a man-made causeway of granite setts, passable only between mid-tide and low water (or by boat). It was the site of a monastery which was twinned with the Benedictine order on Mont St Michel and was a destination for pilgrims, whose devotions were encouraged by an indulgence granted by Pope Gregory in the 11th century. The earliest buildings, on the summit, date to the 12th century.

After the dissolutions it became a fortified castle and in the 19th century the island boasted a thriving little community of 53 houses and four streets with a fulltime population, in 1821, of 221 people all of whom depended on the Lord of the Manor, Baron St Levan, for their livelihoods. There were three schools, a Wesleyan chapel, and three public houses, mostly used by visiting sailors. The village went into decline following major improvements to nearby Penzance harbour and the extension of the railway to Penzance in 1852, and many of the houses and buildings were demolished.

Having timed our arrival to perfection, we got there just as the tide was retreating sufficiently to allow access across the causeway. We wandered across and then up the steep path to the castle. The castle itself was fairly unremarkable as far as castles go (apart from its location, of course) but the gardens were stunning. In one sense it is astonishing that a garden exists here at all, but despite the gales and salty winds, the Gulf Stream tempers the climate so that frosts are a rarity and the rock acts as a gigantic radiator – absorbing heat by day and releasing it at night, creating a micro climate in which all sorts of unlikely plants flourish. It turns out that they are currently looking for a new head gardener – I would suggest Penelope apply but the commute would be a killer! 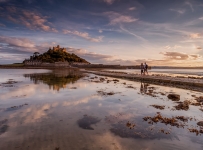 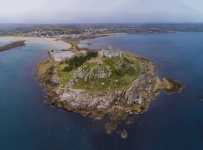 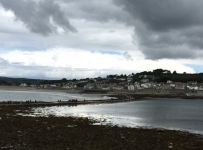 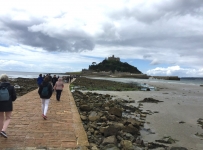 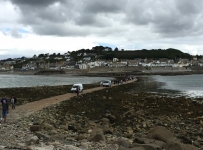 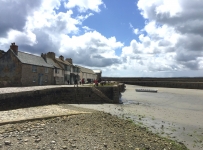 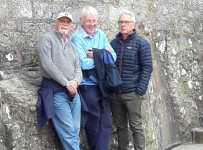 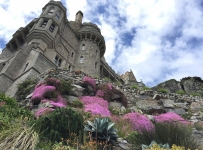 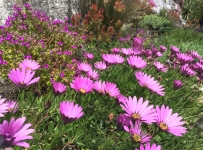 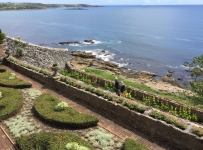 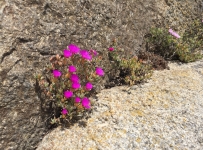 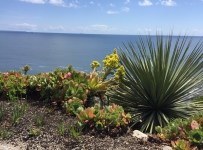 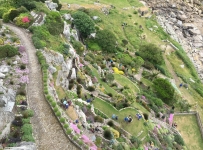 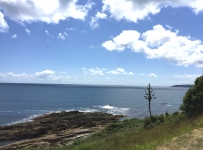 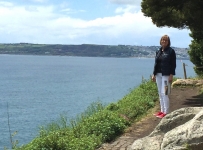 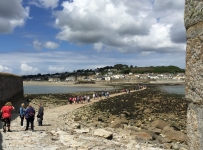 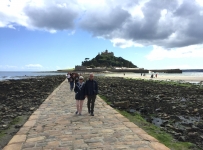 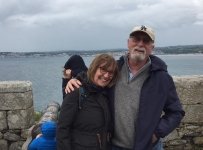 Oh, by the way – just in case you might not guess, not all of these photos are mine!

And so, a happy few days in Cornwall comes to a very satisfying conclusion. I would happily go more often but five and a half hours each way (if there are no traffic issues) is a bit of a drag. Also, I couldn’t possibly continue to eat such copious quantities of shellfish – as well as morphing into a blimp, it simply wouldn’t be a sensible or sustainable policy.