Having complained for weeks about our crappy weather I guess I must commend it when it proves to be delightful. So, just to set the record straight, we have had some gloriously sunny days over the past week with the occasional scorcher of a day thrown in. Lovely.

We’ve been very busy the past few days. Our friends Chip & Leca Boynton came to visit and we’ve been enjoying the wonderful weather, a handful of outings and their delightful company. Their visit coincided with the two major league baseball games played in London between the Boston Red Sox and the New York Yankees. What are the chances of that?

Months and months ago, before Christmas certainly, we had an e-mail from Chip that MLB was going to be playing these two games in London and that he had acquired four tickets for each game. Penny & Leca would both probably prefer to watch paint dry than to watch a baseball game so we persuaded them to join us for the Sunday game and extended an invitation to the Saturday game to Pete & Sally Taylor-Wilkins who were delighted to join us.

Saturday was an absolute scorcher of a day with highs into the 90s (31o Celsius). Chip and I made our way from Banbury to the Olympic Stadium in east London along with several million other folks – the train was packed, the underground was packed and the stadium, when we finally got there, was also packed!

Sadly, the game proved to be a significant disappointment as the Yankees beat the *&%$! out of the Sox. The first inning, in which both sides scored six runs, lasted an hour and neither starting pitcher made it to the second inning. The final score was Yankees 17 Red Sox 13! That’s a football score rather than a baseball score. No matter, we had a great time and discovered that a jug of Pimms and baseball were made for each other.

Sunday Penny & Leca joined us for the second game as did our Nick and his friend Boz. Nick and Boz, always up for an escapade or two, had gone up early to slide down the Arcelormittal Orbit in the Olympic Park. I don’t know whether Nick took any video of their slide but this should give you a feel for what it’s like:

We met up with them after their adventures for lunch at Wahaca, our “go to” place to eat in London. After lunch we made our way to the game and, although it was moderately less disappointing than Saturday’s game, the Yankees managed to sweep the Sox. Poor Chip – it’s a long way to come to see your team swept by the deadly enemy. For me it was a great opportunity to indulge in some major league baseball somewhat closer to home than normal. A great couple of days out.

The fine weather this week has enabled the roofers to crack on with the kitchen extension and we now are fully slated which makes quite a difference. The scaffolding came down on Friday ready for the installation of the bi-fold doors on Monday. There’s still a long way to go but this seems like a significant milestone. 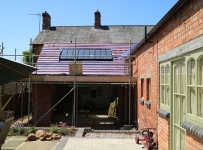 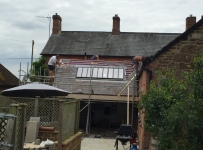 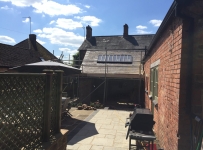 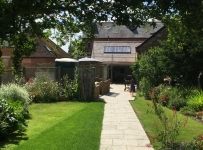 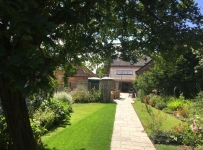 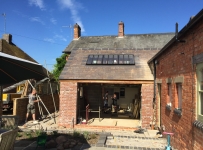 And, as well as the building work progressing at a pace, Penelope’s garden also has thrived in the warm, sunny weather. The judges were around this past weekend to judge the gardens in the village. You will remember that Ms Playchute was awarded a cup for the Best Roadside Garden last year. This year, alas, she was edged out by another lovely roadside garden but she was commended in the Front Flower Garden Cup. The judge commented that Penny’s front garden was “charming [with a] lovely perfume of roses.” 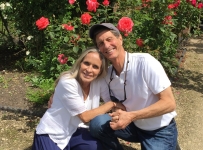 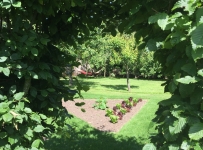 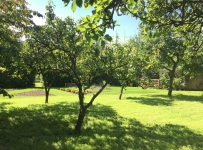 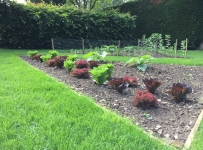 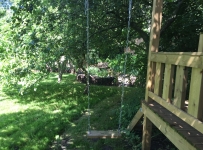 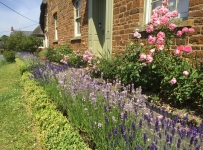 They’ve just started showing the new television series of Catch 22 here and, coincidentally, the following comic appeared the other day which I think sums up the current flock of politicians we are currently enduring both here and in the US.

Yep, none of them are suitable leadership material but don’t seem to know it having inflated opinions of their own abilities and competence. Mind you, since lying seems to be one of the principle attributes of successful politicians, Boris is qualified in spades. I’m not sure he can manage the scale or scope of Trump’s inability to speak the truth but he’s certainly trying to prove me wrong.

Finally, a neighbour posted the following on the Moreton Pinkney Facebook page – a photo of a flax/linseed field not far from here.