Another decent week – what are the chances of that? A bit grey and muggy on a couple of days but reasonably sunny and warm otherwise. Long may it continue.

We had more fun with the Boyntons this week. They went off to Paris for a few days following the baseball and then came back for a few days in London prior to their return to Boston. We went up to town on Saturday and together we all trundled out on the train to Kew Gardens in Richmond. What a treat!

Kew is a place Penny and I have wanted to visit for some time. We have visited their sister site at Wakehurst on a number of occasions but Kew is Wakehurst on steroids. It’s about half the size of Central Park so, not surprisingly, we only managed to explore a small section. We’ll have to go back. Several times, I think.

As it happens, Kew is hosting an exhibition of Dale Chihuly’s astonishing glass sculptures at the moment and this provided another incentive to visit. On one of the many occasions when we have visited Boston, Chip and Leca took us to the Museum of Fine Arts in Boston which hosts a permanent Chihuly, the Lime Green Icicle Tower. We also visited a Chihuly exhibition in Phoenix with Mom and Dad some years ago. Astonishing stuff!

There were a dozen large external installations as well as another half dozen or so in the Temperate House and an exhibition of smaller pieces in the Shirley Sherwood Gallery. In total there were 32 pieces in the glasshouses, galleries and open spaces. If you are familiar with his work you won’t be surprised to learn that the pieces were stunningly magnificent. Some were big, bright and brassy, boldly standing out in the open, others were hidden away amongst the planting, foliage and ponds. 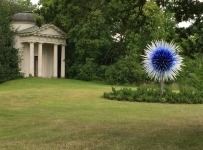 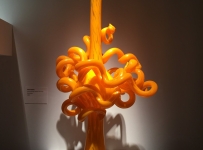 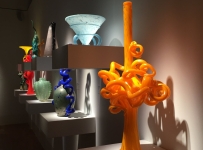 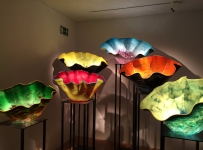 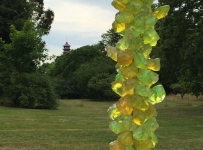 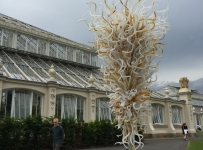 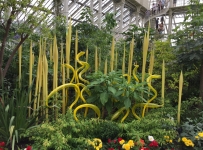 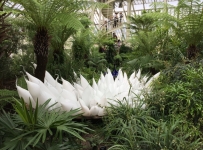 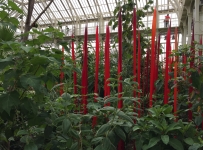 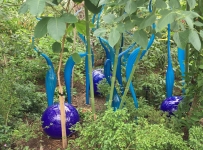 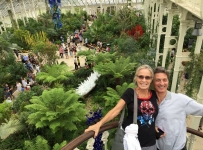 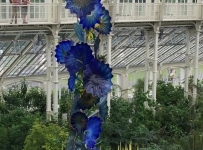 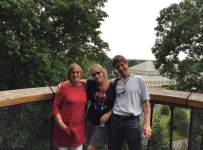 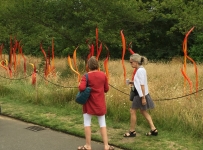 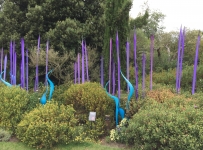 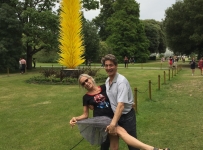 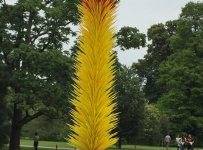 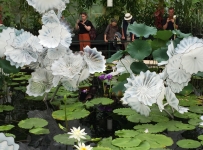 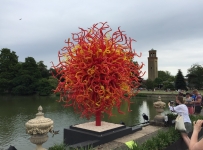 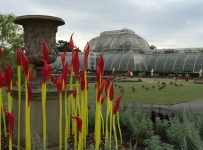 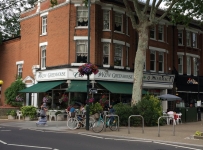 Absolutely splendid. We’ll have to go to Kew again though to see the rest of it!

As I mentioned last time, the scaffolding came down on the kitchen extension last week and on Monday the bi-fold doors were installed. I have to say they look magnificent. Another milestone but there is still a long ways to go. We’ve got a meeting this coming week with the project manager to see if we can work out a plan which will involve us being without a working kitchen for as short a period as possible. There’s still a fair bit that can be done before we reach that stage but at some point they will need to knock through into the “old” kitchen putting the kitchen sink, at least, out of action. We’ve got a sink in the utility room so that’s not a major problem – the crunch will come when they need to remove the current cooker and oven. Perhaps we should take an extended holiday while that’s going on.

I’ve written in the past about the popular accommodation we offer to the armies of swallows and house martins that migrate our way each spring. This year, as in the past, we have a veritable condominium of house martins in our eaves, raising their offspring and crapping all over the window sills and Penelope’s Path below. The first batch (or perhaps second – it’s been a very good year) of youngsters spends the late afternoon and early evening swooping and swirling about the skies and then diving up into the eaves just above our bedroom window. Do you know how hard it is to get a decent photo of these chaps as they soar up past our window? This was the least bad of the several dozen I took.

Penelope and I had a fine tromp across the fields the other day – the oats in the field have done very well so far this year and the Cow Parsley (Queen Anne’s Lace) was in fine form.

I hadn’t realised that Queen Anne’s Lace is known as the “wild carrot” and is edible. No wonder Chip Boynton is such a fan:

Also known as the wild carrot, Queen Anne’s lace is in full bloom across much of “temperate” North America, Europe and Asia right now. The white flower head is edible raw or lightly battered and fried. The seeds work well in soups and stews and can flavor tea, too.

If you catch these plants early enough, you can eat the roots and leaves. These are indeed wild carrots, the ancestor of all cultivated carrots. By the time the flower appears, though, the root is too woody to eat.

A few words of caution: Hippocrates prescribed the crush seeds as a form of birth control more than 2,000 years ago, and modern studies find some truth in the fact that the seeds and flower heads should be avoided by women pregnant or hoping to conceive. Also, to the untrained eye, Queen Anne’s lace looks a little like poisonous hemlock, which will kill you in an hour if consumed. The latter has a hairless stem and doesn’t smell like carrots.

And finally, sorry but I just found the following from Tim Whyatt funny.

Moreton Pinkney Village Fete yesterday – I’ll try to remember to fill you in next time.