Oh, it’s been a busy, chaotic yet productive week in Moreton Pinkney. We survived the village fête, the plumber has been and carried out his first fix and the builders arrived on Wednesday to start the Great Break Through! We are now thoroughly covered in dust and look forward to spending the next couple of months in a similar state of messiness! Oh, the joy.

Last Saturday the village held its fête, the first one for fifteen years and it was a great success! Ms Playchute served on the organising committee and was also responsible for one of the more popular activities, the Garden Club Obstacle Race. I was “volunteered” to drag our barbeque across the road and burn some sausages, the weather was tolerable (overcast but dry) and everyone had a great time. More importantly, the fête raised something approaching £2000 for the upkeep and maintenance of the Village Hall.

Many of my American readers (both of them) might not be familiar with the concept of the Village Fête so the following from Wikipedia might be helpful:

Village fêtes are common in Britain. These are usually outdoor shows held on village greens or recreation grounds with a variety of activities. They are organised by an ad hoc committee of volunteers from organisations like religious groups or residents’ associations. Fêtes can also be seen in former British colonies. In Australia, fêtes are often held yearly by schools and sometimes churches to raise funds.

Attractions seen at village fêtes include tombolas, raffles, coconut shies, bat a rat stalls, white elephant stalls, cakes, and home produce such as jams and pickles. Competitive baking, such as making Victoria sponge cake, is part of the classic British fête. Filmed in bunting-draped marquees in scenic gardens, The Great British Bake Off television series is inspired by the quintessential English village fête. Entertainment at fêtes may include Morris dancing, tug of war, fancy dress, and pet shows. The fête itself is a variation of a fair.

All of which describes our fête tolerably well. There were a number of stands offering various distractions to separate visitors from their hard-earned cash. There were cakes and a white elephant stall, a coconut shy, splat the rat, higher or lower (the card game where the participant has to guess whether the next card drawn from the deck will be higher or lower than the previous) and the Human Fruit Machine which was highly amusing.

This consisted of a giant “handle” which the participant pulled to simulate the spinning of the wheels on a one-arm bandit, i.e., a slot or “fruit” machine. If the three wheels line up with the same fruit showing one wins a prize.

In this version the spinning wheels were replaced by three folks sitting on chairs with a pillow-case in their lap containing various bits of fruit. As the handle was pulled those on the chairs would rummage in their pillow case and extract a “random” piece of fruit. As the afternoon progressed and those running the stall consumed increasing amounts of alcohol, the production became increasingly hilarious. Oddly enough, most people lost but the occasional small child would emerge with three lemons and thus win a prize. Great idea and great fun.

Penny organised the Garden Club Obstacle Race which was perhaps the most popular event on the day. Three participants, usually children but numerous adults took part as well, would line up and sprint off at the given signal. They had to don some gardening gloves and a gardening hat which were laid out on the course. They had to scramble under some garden netting and through a three metre length of plastic poly-tunnel, pick up a plastic shovel and plant pot and wheel them along in a tiny plastic wheelbarrow. Next they came to a bucket of sand with which they had to fill their pot plant, trundle their wheel barrow a bit further along and grab a paper flower Penelope had constructed which was then shoved into the pot. Finally, they grabbed a plastic watering can, watered their flower and sprinted to the end. The following clip of some adults having a go will give you an idea.

There was also a fancy dress competition for the youngsters and it was generally conceded that Jessie was robbed! Her tyrannosaurus costume was brilliant and the three pillows stuffed down the front made for a highly amusing spectacle. For my part, Adam and I manned the barbeque on which we attempted to burn a hundred or more sausages. In fact they were very popular and we sold our entire supply within a couple of hours. Thankfully, no one reported getting ill. 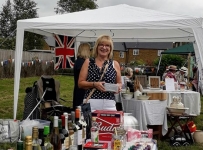 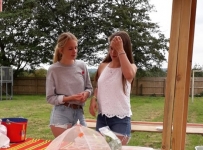 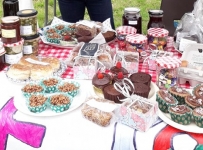 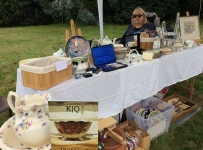 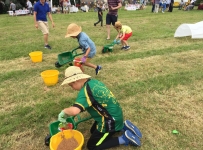 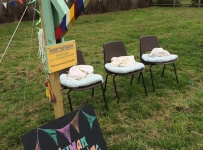 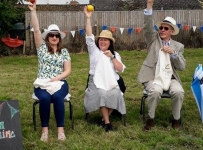 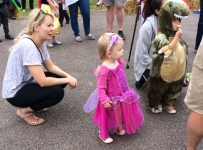 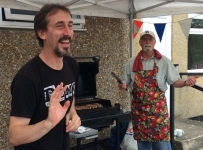 We’ve made some significant progress on the building this week. The plumber arrived to do his first fixings and one of his first tasks was to get into the loft over our bedroom to inspect the hot water cylinder and to plan for the new plumbing and underfloor heating in the new extension.

The loft hatch is immediately above our bed and in order to facilitate his access we had to move it. How often do you move your bed so that you can hoover/vacuum underneath it? If you are anything like me, not very often, if ever! It’s astonishing to me how the carpet underneath the bed can get so filthy. It’s completely covered by the bed, for goodness’ sake. Does the dust and dirt sneak in from the side when we are not looking? I guess so. Never mind, I did find 92 pence in loose change underneath (almost $1.15) so it was worth it!

Then on Wednesday another pair of happy chaps arrived to start the process of breaking through into what was once (and will be again) our dining room. They did their best at erecting some plastic sheeting to try to contain the dust and dirt but any of you who have been through this process will know, it’s a hopeless exercise – the dust gets everywhere! And several of our doors do not latch properly!

They need to make another break though into what was once upon a time our downstairs toilet and they can then proceed to fit new windows and plaster the walls and ceiling of the new extension. Thankfully, they are not going to make the third and final break through into the “old” kitchen for a couple of weeks but once that happens we will be without a kitchen sink for a period of time which could be as long as six weeks! Hey ho, we do have a sink in the utility room so it’s not as if we’ll be without the capacity to do the washing up but everything does have to be moved out of the kitchen so it’s going to be fun for the coming weeks and months. I was a bit disheartened to see the most current project plan which has them finishing everything by the beginning of December! So much for the “three month” estimate we were given once upon a time.

Never mind, it will all be worth it in the end (he says hopefully).

Amidst all the chaos, Penelope and I occasionally retire to the garden bench at the top of the garden. The other evening we were up there sipping a glass of wine and listening to the fabulous birdsong which constantly serenades us up there. A juvenile robin approached and hopped along the top of Penelope’s log wall while we very carefully and quietly observed. The following is the best of the photos I surreptitiously took.

And finally, we had the following from Lucy on Thursday afternoon – Annabelle’s Dance Group won first prize in the Barford’s Got Talent show at school. What a fabulously multi-talented grandchild we have! How the heck did that ever happen?

And finally, finally this was Tim Whyatt’s cartoon this week – I have often despaired at how far I have to scroll down to complete forms on the internet.