Another good week – decent enough weather, good progress on the building site and Annabelle is coming for a sleepover this evening. What’s not to like?

We arranged Annabelle’s sleepover with Nick and Lucy some weeks ago – she’s coming over this afternoon and stopping for two nights. For some reason, she and Penny have decided that they will have a sleep out at the top of the garden at #1 Wood End. The mezzanine level is just about large enough for a double blow-up mattress so it should be a comfortable (!) night.

I just hope that Penny doesn’t need to get up in the night – the headroom at the height of the apex in the mezzanine is about two feet and if she tries to sit up quickly I suspect there may be the occasional cracked skull. Also, the facilities are of the outdoor variety so she will somehow need to squiggle along the mezzanine, scramble down the ladder and make her way out into the great outdoors. Then, assuming she doesn’t get attacked by the foxes, badgers or hedgehogs which frequent our garden of an evening, she can take care of business. Think of them when you tuck yourselves into bed this evening. I certainly will!

It’s been a busy week on the building site. The various vents for the downdraught extractor were positioned on the floor ready for the insulation and underfloor heating to be laid down next week (allegedly). This required that we actually pin down fairly precisely where the kitchen island is going to go. The island will have a sink and a hob and it’s the hob from which the extractor will extract all that needs to be extracted. After much scratching of heads, adding various numbers and coming to several mutually incompatible answers, we “think” we’ve got it more or less in the right place. Thankfully, I think there’s still a bit of leeway – flexible hoses can be used to overcome a multitude of mistakes, we are assured.

On Wednesday a carpenter arrived to construct a barrier between what was the kitchen window and the old kitchen itself to prevent the entire house being covered with grit and dust when the window is removed and the opening enlarged to produce an open walkway through from the old to the new kitchen. This has meant that while our hob and ovens remain intact, the kitchen sink is no more. Also, the various kitchen units which housed pots, pans, cups, glasses, bowls, etc., – all the kitchen stuff that one needs in a kitchen – have been removed and their contents resettled either in the cellar or in the utility room. The utility room has become our kitchen sink and prep area – very confusing for someone like me who has only a vague awareness of where stuff is anyway. Now, rather than just looking in the cupboard or drawer I think it might be in, I now have to look through the cupboards in the utility room as well! Oh my goodness – preparing a sandwich takes twenty minutes of looking for stuff before you can actually begin! Fortunately, we’ll only have to put up with this arrangement for the next six weeks or so!

Thursday the carpenter was out again to remove the window and on Friday the heavy brigade starting knocking the wall down. This again required some fairly precise measurements – kitchen units and ovens (2) are going to go against the wall between the two openings (one into the dining room and one into the “old” kitchen) so there had to be a minimum length of wall space. A similar degree of scratching of heads and adding up numbers ensued. Thankfully Adam was at home to check my sums and again I think we’ve got it more or less in the right place. 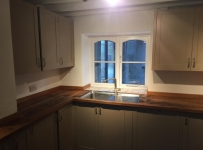 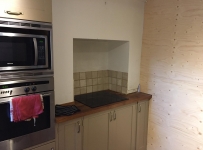 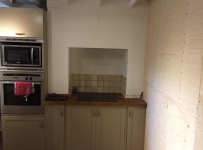 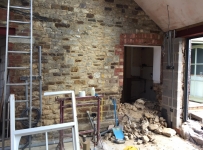 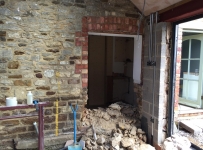 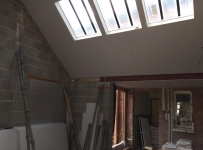 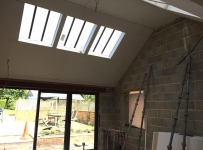 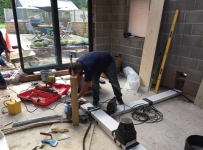 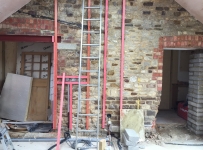 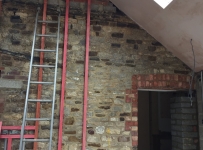 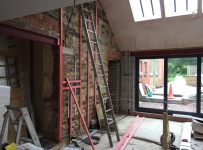 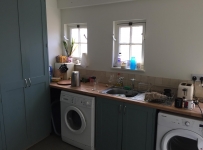 Meanwhile, they’ve also laid out the slot drains for the new paving so that, hopefully, as climate change brings us increasingly frequent monsoon downpours, the paving should drain away rather than encroaching through the bi-fold doors. I am assured that the capacity of the drains will cope with anything climate change might bring our way – I’m still not 100% convinced but if we should happen to get six years of rain in an afternoon I don’t think any amount of drainage capacity will cope.

I ran across this article in the Guardian and thought it was quite fun. It’s a longish read but if you’ve got time it’s well worth it – how a simple, misplaced type can wreak havoc.

One day in May this year, Luigi Rimonti left his home in Gateshead to catch a ferry from North Shields, the first stage in a 1,000-mile drive across Europe to [Rome] Italy . . .

Off the ferry in Amsterdam, Rimonti began to have difficulties with the satnav. He stopped in a petrol station: could someone there help him re-input his destination? A stranger obliged. Tap-tap-tap, enter . . .

You can guess the outcome of this adventure – he was directed not to Rome but to Rom, a tiny hamlet in the hills of Mecklenburg-Western Pomerania in Germany, due east from Amsterdam and a good 600 miles from the Italian border.

I also ran across this article about high heels with some interesting (to me) revelations about their derivation.

Women’s footwear with high elevation at the heel accounts for almost 14 percent of the value of the global $250 billion shoe industry. The shoes are a fixture at footwear trade shows around the world, including at this week’s New York Shoe Show.

But high heels began life as a men’s shoe. One theory says they were designed to help mounted soldiers keep their feet in the stirrups. Persians, the stories go, brought the innovation to Europe in the 15th century.

Since then, the shoes have been associated with male aristocracy (17th century), witchcraft (18th), female sex appeal (19th on) — and back, foot and calf injuries.

High heels are a cultural conundrum for many women who recognize both their debilitating effects and their supposed allure. And they’re a statement piece among some gender-fluid people.

And finally, Happy Birthdays! My lovely sister Sarah had her birthday last Friday as did my brother Sandy’s granddaughter Azalea – happy birthday to you two. And this week we have Sandy’s birthday on Thursday and my niece Amanda’s on Friday. Happy birthday to you all and to everyone else whose birthday I have missed. Missing birthdays is something I do pretty well.