Another good week. Penny survived the camp out with Annabelle, we had a great couple of outings while she was here and the builders continue to make progress, albeit slowly with a few steps backwards from time to time, on the kitchen extension.  We’ll be in by Christmas 2021 no problem!

The Great Camp Out at #1 Wood End was a huge success even if there were the occasional spider or thirty to deal with as well as an assortment of other insects and creepy crawlies. I am assured the accommodation was dry and comfortable if not exactly warm. And neither occupant required the use of the [outdoor] facilities during the night. There was even talk of spending a second night at #1 Wood End but common sense prevailed and both campers reverted to the indoor accommodation on Monday evening.

On Monday afternoon we took Annabelle to an exhibition at the Banbury Museum – they were hosting a Mechanical Circus exhibition which was good fun. Lots of buttons to press which set the mechanical models into action, after which Bubble and I would crawl around the model looking at all the parts and working out how each one contributed to the action. Annabelle also had a chance to lift the strongman’s weights (400 kilograms altogether!) as well as put her head in the lion’s mouth. 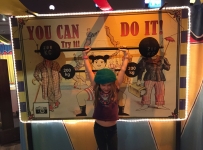 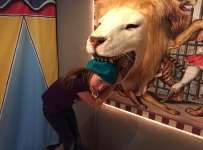 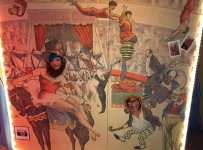 Tuesday we set off for the Riverside Hub in Northampton. This is one of those children indoor play areas of which there seem to be a proliferation nowadays. There’s one in Banbury but this one is considerably larger with a wide assortment of activities to amuse and entertain your youngsters. It has a huge climbing frame type area with lots of slides and other amusing diversions. There is also a large “tree” with appropriate hand and foot holds so that youngsters can practice their rock-climbing skills as well as a go kart track for budding drivers. 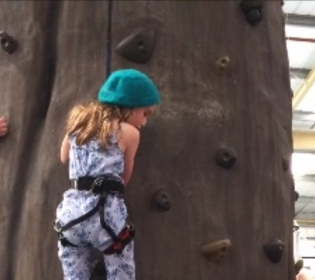 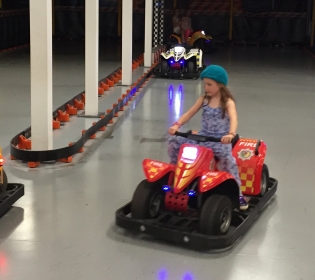 We had hoped to head off to Rookery Open Farm on the way home and to have Adam bring Jessie out to join us. But, as we entered the driving instructions into the SatNav, Mr Google kindly told us that the farm was closed on Tuesdays! Quelle Merde!

So, it was back home and then off to the Upper Boddington play area which has swings, slides, climbing frames, trampoline and a zip line! What more could you possibly want? It was put in by the company building HS2, the high-speed railway line between London and Birmingham to “compensate” the villagers along its path with something to distract the kids. I don’t know about you but I would feel rather hard done by having a new kids’ play area in my village as compensation for the loss in value of my house due to having a high speed train whizzing by every twenty minutes or so.

Steady progress on the building this week – the second knock through is now complete and the plasterers have boarded out ready for skimming. That should have taken place this week but they were held up a bit by some idiot (i.e., me) giving them bogus instructions concerning the proper dimensions of a small wall they were to build at the side of the opening. Fortunately, Penny spotted my error but it did mean some of this nice, neat, new wall which had just been built had to be sawn off!

We also had a couple of other little “mistakes” this week – the windows for the gable end arrived and, mysteriously, they were about 3 inches too short! The carpenter who built them had measured the openings appropriately but he had forgotten to take into account that they would be installed on a blue brick sill. When they were installed I did wonder out loud why there was a gap at the top and bottom and the builders installing them did concede that they couldn’t understand it either! Back they went to be rectified which, naturally, impacts on other things – the plasterers can’t finish until the windows are in place.

Also, the path outside the extension and into the utility room seemed to have a significant slope toward the drain. Clearly, there needed to be something of a gentle slope toward the drain but this was in the region of 3 inches over a span of about six feet. Looking at it gave one the impression that you were on a small boat being tossed about on a stormy sea. The issue here was to do with how the original rain water drains were laid out and our wish to have a slot drain rather than a larger more obvious drain. So, the paving slabs all had to come up again and the drain dropped by about two inches to reduce the slope. What’s that they say – one step forward and two steps back? Maybe Christmas 2021 is looking a bit optimistic.

I ran across another lovely metaphor for the sh*tstorm that is Brexit on Facebook the other day.

I’m not saying there wasn’t a democratic mandate for Brexit at the time. I’m just saying if, after some deliberation, I decide to order fish at a restaurant that was known for chicken but said it was happy to offer fish, and so far I’ve been waiting three hours, and two chefs who promised to cook the fish had quit, and the third one is promising to deliver the fish in the next five minutes whether it’s cooked or not, or indeed still alive, and all the waiting staff have spent the last few hours arguing amongst themselves about whether I wanted battered cod, grilled salmon, jellied eels or dolphin kebabs, and if large parts of the restaurant appeared to be on fire but no one was paying attention to it because they were all arguing about fish, I would quite like, just once, to be asked if I definitely still wanted the fish.

Yep, that just about sums it up. The current debate intriguing us at the moment concerns the theoretical constitutional issue of whether Boris the idiot Johnson can force through a No Deal Brexit even if he loses a vote of no confidence. Apparently, if a Prime Minister loses a confidence vote there is a two week period in which attempts can be made to form a new government. Team Boris are maintaining that they could force through a No Deal even if there is no government during that period. Ain’t democracy wonderful? The next few weeks are going to be fascinating.

Finally, a friend in Yangshuo (actually a friend of Adam’s who we met and who became a friend of ours on our visits to China) posted a link to the following video on Facebook. It’s a piece by a chap named Daan van Reijn who’s done a number of similar pieces from various parts of the globe.

It might give you a feel for why we enjoyed our visits to this part of China so much. The scenery is simply stunning!

And finally, finally, the BIG news of the week is that Ava passed her UK Driving Test on Friday and is now the proud holder of a full UK driving licence! We’re all very proud of her!

We’re off next weekend so there may be nothing next week. Move along – nothing to see here.