It’s been a mixed week – fresh, autumnal weather with changeable skies and a fair dousing of rain thrown in just for fun. We enjoyed what might be the last barbeque of the season last Sunday, progress on the kitchen has reached an exciting point, we had a great outing with some friends and Boris the Twat extended his parliamentary record to seven votes called, seven votes lost (and much more besides).

Nick, Lucy and Annabelle popped over on Sunday last week for a spot of lunch and Penelope asked me to barbeque a chicken. No problem, I’m always game for a bit of carnage and incineration so off we went. The skies looked somewhat threatening and sure enough the heavens soon opened and downpours commenced. Never mind, though, the chicken was excellent and sea bass fillets produced for the pescatarians were also very passable, I was informed.

This may have been (time will tell) the last barbeque of the season. I realise that I am a wimp compared to my brother Sandy who barbeques 365 days a year but I am a fair-weather barbequer. If I am working hard to scorch some meat or other food offering, I want it to be sunny and warm so that I can moderate the process with a gin & tonic or a large glass of red wine in hand.

The main part of the kitchen extension – the new kitchen itself – is getting tantalisingly close to becoming operable. As I wrote last time, the kitchen units arrived along with all the appliances and these have gone together with only a modest degree of frustration and a few missing pieces. On Wednesday a chap from the Granite House arrived to take a template for the work surfaces we are having. The surface on the kitchen island requires holes for the kitchen sink and the induction hob and so this guy arrived with a very elaborate bit of technology – apparently they can cut this granite-type surface to a one or two millimetre tolerance. He took a lot of measurements by hand and then set up a laser connected to an iPad type tablet and set it off. Mightily impressive. The finished surfaces should be back with us on Thursday of this week so we’ll be able to tell at that point whether he and his kit were any good. 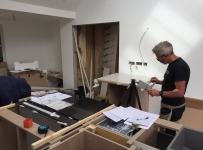 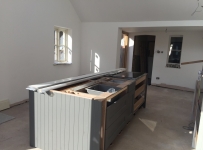 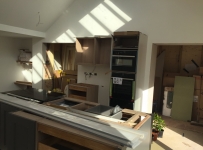 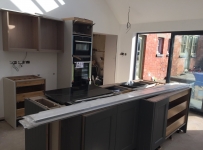 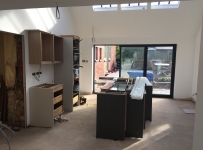 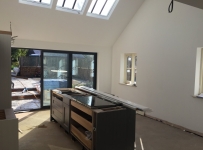 On Friday we took ourselves off to London for a visit to Hampton Court Palace, a magnificent royal palace along the River Thames about 12 miles southwest and upstream of central London. Cardinal Wolsey, one of Henry VIII’s chief advisers, started building the palace in 1515 but as he fell from favour he gave the palace to the King. Henry VIII enlarged it considerably and several important events in the Tudor period occurred here.

In the following century William III initiated a massive building program which did away with much of the original Tudor palace. His intention was to create a place to rival the Palace of Versailles. His work ceased in 1694, leaving the palace in two distinct contrasting architectural styles, domestic Tudor and Baroque – an architectural mis-mash. King George II was the last monarch to reside in the palace. 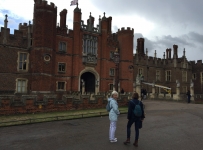 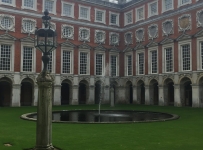 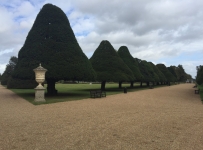 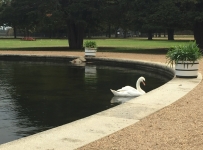 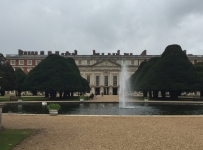 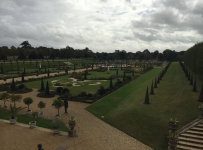 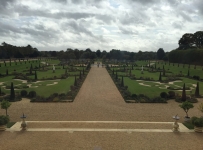 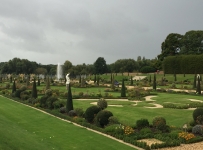 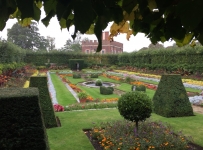 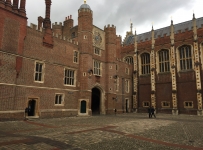 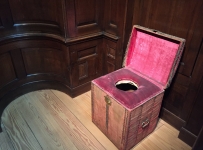 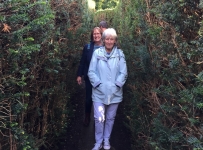 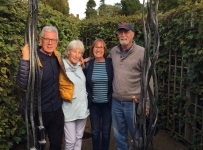 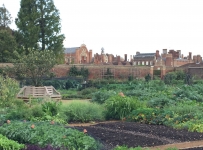 As many of you know, I have been delving in to our family heritage and through our Joy ancestry we have distinct connections to Henry VIII, Anne Boleyn, Catherine Howard, etc., (as does everyone else in the world, I think). I did take my place with Lady Penelope at my side at the top table in the Tudor banqueting hall but when I asked the staff to prepare the royal bedchamber so that we could have a nap I was shown the door.

After wandering through a small portion of the palace and, in between the showers, through the main formal gardens, we set off to experience the Hampton Court Maze. I’m sure many of you have read Jerome K Jerome’s Three Men in a Boat (and, if you haven’t, you should do so – it’s a masterpiece). In the book the adventurers visit Hampton Court and Harris is somewhat scathing in his assessment of the complexity of the maze. After several hours of fruitless wandering, however, he needs to be rescued by one of the keepers who climbs a tall step ladder in an attempt to direct him to the exit. Jerome describes the scene so much better than I can and if you’re sufficiently motivated you can read the relevant passage here. I was delighted to (a) see the tall step ladder which the keepers presumably do indeed use to help people find their way out and (b) find our way in (and out again) without too much confusion.

A splendid day out notwithstanding the train chaos we enjoyed at the end of the day on our return journey back into central London – a train had hit an object on the line causing travel mayhem! Apparently, (and I do think this is bizarre), the object was a sofa. How on earth does a sofa come to be on a main railway line? So, quite a bit more slowly than we had anticipated, we eventually made our way back into town, across to Marylebone via the Underground and home again on the marvellous Chiltern Railway service which serves our area. No sofas on the tracks on the way home at least.

We also ran across a lovely bit of graffiti on the train ride out to Hampton Court on the Friday morning:

Boris the Twat enjoyed yet more humiliation this week with the Supreme Court judgement that he had acted unlawfully in asking the Queen to prorogue Parliament. So, he’s a bona fide liar (having been sacked from three previous jobs when caught lying to either his boss or line manager) who now stands accused of lying to the Queen in giving his reasons for asking her to send Parliament home for six weeks. Naturally, however, he has no intention of resigning and fundamentally disagrees with the judgement. There’s that sense of entitlement again – whatever Boris wants, Boris gets. John Crace, as always, had an excellent summary in the Guardian:

One of the more unusual takes on the supreme court judgment was Michael Gove insisting that Boris Johnson was a winner like Pep Guardiola, the Manchester City manager. If losing six [now seven] consecutive votes in the Commons, being found to have unlawfully prorogued parliament, losing your majority in parliament, being accused of misconduct in public office through the award of a grant to a friend whose UK phone number redirects you to a Florida mailbox – not to mention countless other minor acts of self-harm – makes you a winner, I’d hate to think what Gove reckons would make up a losing streak.

I mentioned last time how much we had enjoyed the NT Live streaming of Fleabag. For those of you who might be interested in seeing the series, I’ve discovered that it’s on Amazon Prime for those of you who subscribe to that service. It won four Emmys at the recent awards ceremony. Check it out.