Boy is it quiet around here! After a year, four months and four days (but who’s counting?) Adam, Ava and Jessie were finally able to move into their new home last Sunday. The silence in the mornings can be somewhat disconcerting until one remembers that the dynamo that is Jessie is no longer in residence.

They bought a house on the southern outskirts of Northampton and completed a few weeks ago. They have spent the last several weeks decorating, cleaning and knocking things about. In particular, Adam had the great idea of removing a wall between the kitchen/dining area and the living area and it came out great – makes the place feel considerably larger and lighter. 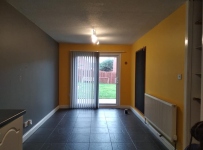 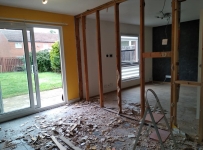 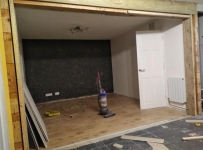 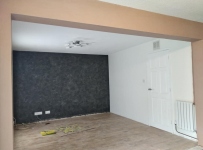 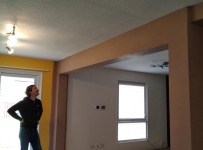 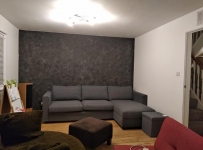 They’ve done very well – this is a four bedroom semi-detached house at the end of a terrace. Because it’s at the end of the terrace the garden is larger than most of the others so there’s lots of room for Jessie to let off steam. It’s also about a five minute walk to the local nursery and primary school, the doctors’ surgery, shops, a playground and a community centre with three or four buses an hour into the centre of Northampton. It’s about half way between here and Adam’s work in Wellingborough so it saves him about an hour a day on his commute. Win, win, win. So far they’ve settled in well and there seems to have been little trauma in introducing Jessie to the concept of sleeping in her own (separate) bedroom. We are very proud of them.

So far so good on the appliances we were able to give them when they moved. When we moved out of Byfield we kept the washing machine, refrigerator and dishwasher from the Annexe. They’ve stood in our garage for the past four years and we were unsure how reliable they might prove to be. No telling how many rodents had built their nests in their innards or chewed the hoses. No leaks so far though and the contents of the refrigerator seem be chilled so win, win, win again.

For all your address books their new address is:

It’s been a miserable and cold week. Rain, rain, rain and then some more rain. I clearly spoke too soon when I suggested last week that the floods have been confined, so far, further north. We had our share of flooding on Thursday when it rained all night and many of the local roads were just about passable with care. The brook at the end of the village burst its banks but thankfully did not flood the old Mill House just next door – apparently it came within a few inches before receding again. We had to navigate a mini-flood in Woodford Halse when we set off on Thursday morning to get our flu jabs in Byfield. According to one of the plasterers, it got worse later in the day and on Friday morning there were a number of abandoned cars which had managed to hydro lock themselves as they tried to get through.

There’s been more progress on the building work this week. Floor tiles have been laid in the old kitchen, the walls have been plastered out and the units arrived on Friday afternoon. Once those units and their respective worktops get installed there will just be some outstanding work to do in the utility room. The toilet which was at the end of the entrance corridor is being relocated to here and we’re hoping to up-cycle some of the old kitchen units into “new” units for the utility room.

I suspect that the “snagging” will drag on well into 2020 – there are dozens of “little” things that need to be put right – the list runs to several sides of paper. Still, we should be in decent shape for Christmas and, more importantly, by the time our first guests arrive to stay in the now vacated Guest Wing on Saturday 21 December. Fingers crossed.

We had a fun time babysitting Annabelle on Wednesday evening while Nick and Lucy went out to dinner to celebrate Lucy’s birthday. Not that she needs much babysitting, of course. She had us organised in no time.

Nick and Lucy went for dinner at Le Manoir aux Quat’Saisons, Raymond Blanc’s exquisite Michelin-starred restaurant/hotel in south Oxfordshire. We had the good fortune to eat there once, for lunch a year or so ago, and it was absolutely sensational. Not only is the food outstanding and the service impeccable but the whole experience is simply wonderful, absolutely flawless. If you’re a Facebook friend of Nick’s you will have seen the photos of their meal – we’ve not yet had the full description which we are looking forward to hearing about. (If you have difficulty understand Raymond Blanc’s accent you can switch on the closed captions).

I’m sorry we were never able to take my folks there – my father in particular would have loved it. However, since one needs to take out a small mortgage to be able to eat there it’s probably just as well.

Finally, this from Whyatt tickled my fancy this week. I know that Penny would love to get me a cone of shame.