This week we have mainly been self-isolating, hiding indoors most of the time hoping to avoid just about everyone and washing our hands every 20 seconds for ten minutes. Is that right? We’re coping well so far – after about three days we’re at least still talking to one another. According to the government we’ve only got another three or four months to go until the worst is over.

The voluntary isolation has enabled me to crack on with the Utility Room – new sink and cabinets. As I wrote a few weeks ago, we had been hoping to reuse some of the units which came out of the kitchen. However, the few that were usable were rejected by Ms Playchute so we got some new cheap units and a new worktop which are now more or less in place. We’re just about ready for the electrician to return to fit the final two power sockets for the washing machine and the tumble dryer. Then there’s just the wee matter of decorating and hey presto, we’ll be finished (indoors at any rate).

We had a couple of travel plans in the pipeline which we’ve now had to cancel due to the Coronavirus. We were to have travelled to New England for my mother’s memorial service in April but, after discussions and correspondence with my siblings we’re all agreed that postponing it is the sensible thing to do. Likewise, Ben, Brex-Anna and Max were planning to come for a visit in May and we had planned to have an outing to Bruges and Amsterdam. Their visit is now off as well. Quelle merde!

Along those lines, we Facetimed with my younger sister Susie earlier in the week. As well as discussing the virus and our mother’s memorial service, she remarked that they were enjoying a really nice day in Portland. She then asked if our day(s) had been any better of late. Penny and I glanced at each other and then laughed uproariously. Rain, rain, wind and rain. Same old, same old. Having said that, to be fair we have indeed enjoyed the occasional brief spell of sunshine and taken the opportunity for a tromp across the fields. Apart from sliding ankle-deep through the mud on a couple of occasions we survived to tell the tale.

By the way, if you are looking for some good reading suggestions while you self-isolate, I’ve recently finished the Bill Bryson book The Body: A Guide for Occupants and can recommend it wholeheartedly. I’ve just started the last volume of Hilary Mantel’s trilogy about the life and times of Thomas Cromwell, The Mirror & the Light which, so far, is a masterpiece. At 900 odd pages it’s certainly not a “light” read – no wonder it took her eight years to finish. Another suggestion? Penny has been raving about Educated by Tara Westover, a book she’s just finished for the book club. That one will have to wait until I finish with the Mantel which could be some time! We would welcome any further suggestions.

Spring must be just around the corner. We’ve been having daily visits from the General, a fine male pheasant who lives somewhere nearby. Every morning for the past week or so he has marched down our garden path and strutted up to the bifold doors to investigate his reflection. Penny says that his wife also makes the journey from time to time but I have not seen her yet. Of course, the General is patrolling his territory and watching out for any interlopers. That fellow in the glass must look pretty suspicious but he hasn’t started attacking his reflection yet.

Speaking of Spring, Penelope’s woodland garden is a delight with the daffodils in bloom.

A couple of weeks ago one of my “memories” popped up on Facebook – a photo of Annabelle and Penny marching through the puddles on the path at the bottom of the village. We were able to reprise the walk on Sunday when Nick, Lucy and Annabelle came for lunch. Still two of my favourite dirty women. 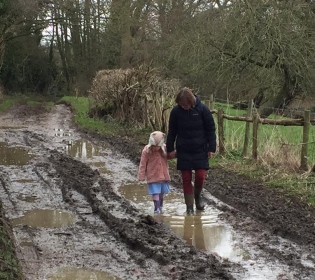 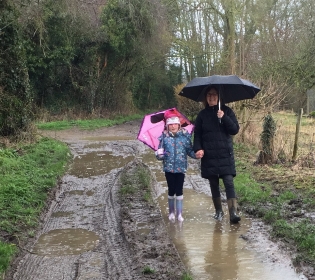 Finally, I ran across an article in the Guardian which I found amusing – a pig on a farm in Yorkshire started a small fire when it swallowed a pedometer which then combusted in its pen after excretion, the copper battery reacting with the dry hay and pig shit. The pedometer was apparently being used to prove the pig’s free range provenance.