I have to say, if we have to be in self-isolation and lock down, there could be worse places to be than beautiful downtown Moreton Pinkney. We have open fields surrounding us with a plethora of public footpaths from which to choose for an afternoon walk. We also have a large garden which is a treat to retreat into (as long as the weather stays fine) and which also, now that Spring is here, needs a multitude of tasks and chores carried out.

Thankfully, the weather for the most part this week has been absolutely glorious. Bright, bright blue sunshine with only a modest breeze and temperatures reaching the lofty heights of 12o C (a very pleasant, in the sunshine at least, 56o F).

It won’t surprise you at all to learn that Ms Playchute has been in the garden every day digging and weeding and digging some more. She has moved shrubs which were in the “wrong” place and also moved some roses to a spot where they won’t so easily tear her to shreds as she gardens amongst them. Now, they’ll only tear me to slivers when I mow the lawn alongside.

I’ve been doing my bit too! She and I hacked and chopped at the neighbours’ holly tree (with their permission, I hasten to add) which was overhanging our garden and pushing our fence back. I thoroughly enjoyed hanging precariously on the top rung of the ladder leaning over the fence armed with saw, secateurs and lopping implement to take down one very large section. I was then able to spend several more hours chopping and clipping the bits so that they could be disposed of more easily.

I also had the distinct pleasure of moving a pile of old bricks so that Penelope could dig the area at the back of the house. I was then able to chop and chip the old mortar off them so that we could reuse them in an elaborate plan Pen has to transform this area of the garden. A small garden shed and some hard standing is what she has in mind, hence the need to be able to reuse all the old bricks.

We’ve taken advantage of the good weather and the isolation to take some lovely walks around and about and it is lovely to wander amongst the sheep and lambs. As well as the walks we’ve been able to enjoy a couple of excursions on the bikes. Just some simple shortish circuits to begin with. We’ll have to work up to the Land’s End to John o’ Groats marathon once the isolation restrictions have been lifted. I must say, it was very pleasant cycling long with almost no traffic (just the occasional white van), the birds singing and squawking in the trees and the lambs gambolling in the fields. Lovely. 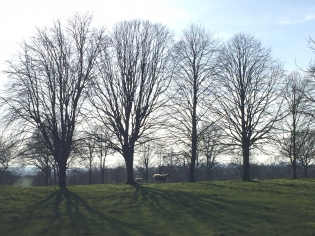 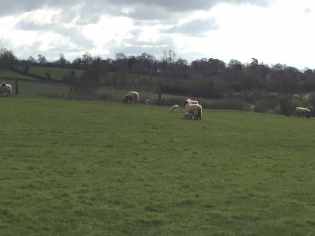 The General and Mrs Pheasant continue to provide some wonderful entertainment most days. They are almost always just outside the bi-fold doors on the patio when I come down in the morning. They have become a bit more blasé about our presence as long as we stay on our side of the doors. Having said that, on Saturday morning when I came down the General was about 5m away from the doors. When he saw me he came belting toward the doors and looked as if he would have pecked me about the shins. As it was, he was only able to peck his reflection in the windows. Meanwhile, Mrs Pheasant strolls around casually glancing occasionally in our direction. If we go outside they do make a calm and orderly retreat up the path but with no real haste or concern, seemingly. I guess since Penny feeds them (and then treads the pheasant shit into the new kitchen) they are beginning to appreciate that we mean them no harm. Still, if things become increasingly apocalyptic the General is certainly one well-fed pheasant – he’ll make a meal or two.

I’m not sure if our foreign readers will be able to take part but the National Theatre is providing some free broadcasts of some of their shows on YouTube. (Presumably, if it’s on YouTube you should be able to get them?) They are being broadcast on Thursday evenings starting at 7.00 pm our time and I think they will be available for a week. The first one, this coming Thursday, is One Man, Two Guvnors. We saw it at the theatre but will happily watch it again – it was very good. More information on the NT YouTube site.

And finally, more in the “You Couldn’t Make this Shit Up!” department, the UK has declined to participate in an EU procurement of ventilators because (a) we’re no longer part of the EU and we’re determined to do our own thing or (b) when the backlash hit, the second excuse given – we missed the e-mails inviting us to join the scheme. In either case you could not make this stuff up.