Week Five of the Lockdown – we’re still here in glorious isolation! Thankfully, the weather this week has been (mainly) outstanding – warm temperatures and blue(ish) skies. Ideal for all the gardening Ms Playchute manages to find to do. Also, ideal for me to do one of the things I do best – lounge in the hammock in the orchard. Hey, I’m doing my bit to save the country!

The garden is looking more and more glorious every day as Ms Playchute tidies, digs, weeds, prunes, rakes and digs some more. In a few weeks’ time it will be ready for consideration for Home and Garden magazine.

We are often away at this time of year. Indeed, today we should have been on an airplane to the States to visit with my brothers and sisters, scatter my mother’s ashes at Lake George and hold a memorial in her honour at Kendall, the assisted living facility where she spent her last years with my father. Sadly, that can’t go ahead at the moment but I’m sure she understands and will be happy for us to gather together and celebrate her life when conditions allow.

The silver lining to that particular cloud is that we will be here to see the Spring fully emerge in beautiful downtown Moreton Pinkney. We’ve often seen the plum blossom but now we will also get to see the apple, pear and cherry in the orchard as well as what we still have left of the wisteria. These might whet your appetite:

The General and his wife continue to visit. We did, though, fear we had lost them last week. After weeks of arriving for a tour each morning and repeating their visits several times a day, on Thursday they were nowhere to be seen. For the last week or so Penny has been putting dried meal worms out for them for breakfast each morning and the last couple of days the General has been waiting, demanding more efficient service. On Thursday, nothing. Pen even enquired whether next door had seen them but no. Then, late Thursday afternoon we heard the General announcing his presence and about 6.00 they sauntered down. No explanation as to what they’d been up to but it was nice to have them back.

On Friday morning they were back as usual. Normally, Penny is up well before me and throws them some dried meal worms. This morning I stumbled downstairs before she was up and there were the General and Mrs P, at the bi-fold doors staring in waiting for their breakfast. I carefully opened the doors to throw them their breakfast and they thanked me profusely before gobbling the lot and sauntering very casually back up the garden. Thankfully, there’s also enough meal worms for Wally Wagtail who has quickly learned the morning routine. Although he’s not waiting impatiently for the canteen to open, he’s there in a shot almost before the first handful of meal worms hits the patio. 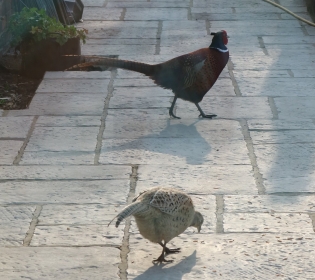 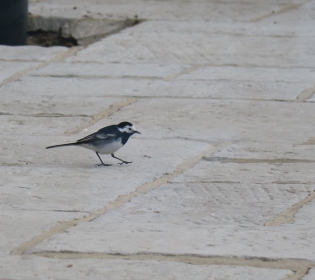 Did you see the Super Moon earlier in the week? Nope, me neither but if I had the photo I would have taken would have looked very similar to the following from the Guardian:

Except that it would have been out of focus and obscured by clouds.

As well as our outings on the bikes and across the fields, there has been so much to watch and see online. Thursday evening we watched the National Theatre at Home presentation of Jane Eyre which was outstanding. Quite a bit heavier going than last week’s One Man, Two Guvnors but well worth the effort. I think it’s available until next Thursday when the next presentation from their catalogue is Treasure Island.

And then Friday night we watched Hamlet from the Globe Theatre in London which was, again, outstanding. In particular, I thought the woman who played Hamlet, Michelle Terry (yes, woman) was sensational, especially in the middle part of the play where he/she is “mad.” I think it’s available for fourteen days and it was first put up last Sunday so, if that’s right, you’ve only got a week left.

And the Royal Academy has produced a tour of their present exhibition – Picasso and Paper which is available online.  We were to have seen this in early March but decided not to go – it was just after the coronavirus made its debut in London and we didn’t really fancy spending time in close proximity with folks on the train or the underground. Actually, after we decided to cancel Penny conceded that she would rather watch paint dry than go to a Picasso exhibition – the only reason she had agreed to go in the first place was because we were due to meet up with some wonderful friends. Goodness, that seems a long time ago.

As I said to her in my reply, I’ve been practicing for this all my life!

She also sent along a couple of virtual tours of a couple of her favourite Canadian artists’ studios, Philip Craig and Ron Bolt, which I thought were absolutely charming.

And finally, in terms of potential lockdown entertainment, the National Open Garden Scheme has produced videos of some of the splendid gardens which would normally be open to visitors at this time of year. Wonderful.