Week Six of the Lockdown and it’s been another pretty fine week – very decent weather if somewhat cooler than last week. Lots of bright blue sunny skies. Although the weather folk have been “promising” some rain (which we need), it always seems to be just north or south or west or east of here. We finally had a moderate soaking yesterday but could do with more. Oh well.

We’ve passed this week much like the last six – hiding at home and indulging in a bit of gardening. Well, Penny continues to tend to the garden – all I do is mow the lawns once in a while and then have a well-deserved rest in the hammock.

Penny’s other source of amusement this week has been dismantling and re-building a garden wall. I was, of course, more than happy to ignore it but once Penelope gets an idea in her head she’s hard to restrain, as I’m sure you know.

Easter Sunday we had a fun “virtual” Easter egg hunt with Annabelle. Since we weren’t able to join them we had a video call with them instead. Annabelle was blindfolded and held Nick’s phone out in front of her so that we could guide her to the “hidden” eggs. (Fortunately, Nick had the foresight to send us photos of where each of the eggs were hidden. Otherwise we might still be hunting them to this day). After a couple of technological mishaps we were able to direct Annabelle to each of the hiding places and luckily there were no broken noses or bones during the escapade. After Annabelle had found all her eggs we switched roles and she guided me and then Penny to find a hot cross bun which the other of us had “hidden” for the occasion. Annabelle was considerably better at guiding us than we were with her. Success all round.

Each year about this time the Moreton Pinkney Garden Club holds a Spring Garden competition. With all the “spare” time we’ve had this year, ours would have been right up there with the other usual contenders. This year, however, the competition can’t go ahead in the normal way so entries have been made by photograph – everyone who wants to enter can submit one photo only. These are the two we’ve selected – we’ll let you know if we are a grand prize winner or just another participant. 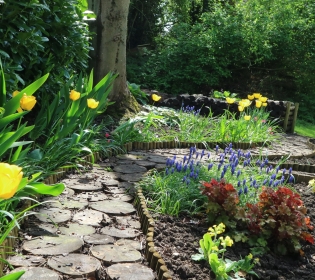 We’ve enjoyed a couple of good bike rides this week. I’ve been impressed by all those folks who, during the lockdown, set themselves goals and then set about to achieve them. Like the guy who climbed the equivalent of Mt Everest by tromping up and down his stairs a gazillion times. His wife and family were on the balcony of their home to cheer him on as he reached the summit. I forget how long it took him but I’m pretty sure he didn’t do it all in one go.

So, in a similar vein I thought I might cycle from Land’s End to John o’ Groats. For those of you less familiar with the British Isles that’s right from the furthest most tip of Cornwall in the southwest to the furthest most tip of Scotland way up in the north. No competition, no deadline, no fund raising, no nothing. Just a leisurely cycle along the highways and byways around beautiful downtown Moreton Pinkney. Apparently, the most direct cycle route is 874 miles which surprised me – I thought it was further.

As of the end of last week I’d done 85.7 miles so almost 1/10th of the way. I’ll let you know how we get on. And, at the very least, it gets me out to enjoy the marvellous countryside we have around here.

We had the delight of the return of our resident house martins this past week – three weeks earlier than “normal.” The bluebells are also up, again about three weeks early. Sorry to all those of you who might be climate change deniers but there is something going on!

The house martins have been inspecting the various luxury accommodation available in our eaves and various families have completed their tenancy agreements and moved in, busily carrying out minor repairs and making the nursery comfortable for the new arrivals. I did think about inserting a clause this year specifying that they would be liable for immediate eviction if they shat all over our window sills but none of them would agree to such an egregious condition.

The General and Mrs P continue to provide entertainment making their daily journeys down to the canteen for breakfast and oftentimes an afternoon snack. I did laugh the other day – as I looked out the bi-fold doors they were both outside the door to Penny’s sewing room staring in at her and waiting, presumably, for her to come out and throw them some more mealy worms.

As usual, lots of amusing posts on Facebook and other social media outlets this past week. I ran across one which explained quite succinctly why people were hording toilet rolls – many folks are having to eat their own cooking for the first time.

Another which was particularly apt but first a brief explanation for those of you who live abroad. For the past several weeks there has been a daily news conference headed up first of all by Boris until he ignored his own advice and caught the virus and then by a succession of barely literate government ministers. Fortunately, they are accompanied by scientists and doctors to ensure that we actually get some sort of coherent message. The lecterns which they stand in front of have a snappy slogan to reinforce the message they are giving and when the lock-down was announced it was as follows:

It didn’t take long for someone to come up with an equally snappy message given that the Coronavirus has laid bare for all to see the damage and destruction that the Tories have inflicted on the NHS over the last ten years of their misrule:

Tory voters. At the next general election, stay at home, protect the NHS, save lives.

Also, as usual during these extraordinary times, there’s been lots to see and do online.

The Guardian has an article with links to four virtual tours of antiquities in Egypt which are simply stunning! The four are the Tomb of Queen Meresankh III, the Mosque-Madrassa of Sultan Barquq, the Coptic Red Monastery and the Ben Ezra Synagogue.

The Royal Academy launched an Exhibition on Screen of two David Hockney shows. We didn’t see either of these in town so it’s great to be able to visit them during this bizarre period.

And, if you’re a fan of Fleabag there’s an opportunity to see Phoebe Waller-Bridge’s one woman show from 2019 at the Soho Theatre. It’s part of the NT Live series but you do need to make a minimum £4 donation.

And finally, this week’s National Theatre at Home presentation was Treasure Island which we watched on Friday night. It was very good but . . . Penny thought it was too “pantomimish” and I too thought the same thing from time to time. It was a production that I think would have been better seen live – it did not translate to the small screen very well. The set and production were incredible but much of the atmosphere got lost, I think, on its travel through the ether.

Next week it’s Twelfth Night with Tamsin Greig as Malvolia.