Lockdown week 12 and it’s been another fine week. Scorcio, in fact. Pleasantly warm bordering on hot at times, sunny with bright blue skies. Still no rain though which is beginning to be a bit of a concern. The garden is looking positively splendid at the moment but the lawns, borders and vegetables are gasping for some water. And, there’s no sign of any rain on the horizon.

Penny’s birthday on Thursday was excellent. We went for a bike ride in the morning and then, soon after we returned, Nick. Lucy and Annabelle turned up. I knew they were coming but it was a wonderful surprise for Penny and we were able to have a responsible, socially-distanced birthday celebration on the patio and up in the orchard. Very nice.

Then, as far as Penny was concerned, later that afternoon we were going to pop across to Adam’s and drop a few presents off for Jessie who, of course, shares Penny’s birthday. What a surprise (for her) when they turned up at ours for another birthday celebration not long after Nick & Lucy had left. Another very responsible birthday celebration, this time for the two birthday girls. Two cakes, two ice creams and lots of presents. A success all round. 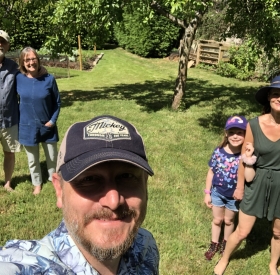 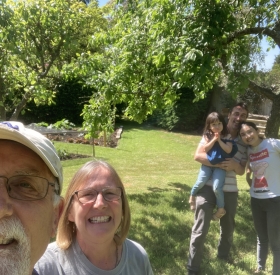 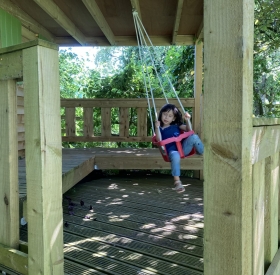 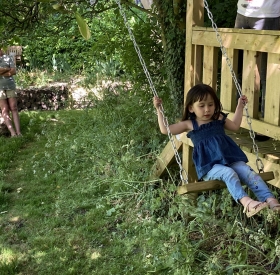 And I must share a photo of the present I was able to give to Ms Playchute – another of my brother Sandy’s marvellous creations:

Good weather lends itself to good bike rides and we’ve enjoyed a fair few this week. As of Friday I was on to Stage 3 of the Land’s End to John o’ Groats virtual expedition. I am just about halfway between Bath and Ludlow, right about at Ross-on-Wye, a lovely little town as I remember.

Hooray! More relaxation of the lockdown this coming week. Still completely baffling information from the government who clearly are just making this up as they go along as their proposals continue to be so absurd as to be almost comic. And, this is in spite of the advice from some of the scientists allegedly informing government decisions that it is still way too early to ease the lockdown restrictions.

The proposal that any arrivals from abroad will need to self-isolate for 14 days is to begin on 7 June (I think). Great idea – we should have done this at the beginning. But, when someone asked how it was going to be enforced, there was a general waffle about trusting people to do the right thing. In any event, most arrivals would have to get on either the train from Gatwick or the underground from Heathrow and travel into London to reach their self-isolating holiday home. Thus, potentially infecting thousands. Interesting conundrum – Boris and his team are due to go to the US at the end of June for a G7 summit meeting. Will they all need to self-isolate for 14 days on their return? It would be nice if they did but we all know there is one set of rules for the establishment elite and one for the rest of us – see below. Nope, you could not make this up.

On Thursday the “world-beating” track and trace system was launched only for the web site to fall over leaving thousands of (partially) trained contact tracers twiddling their thumbs. Oh, and the app which was really going to be the absolute game-changer, is still not ready after its “extensive” trials on the Isle of Wight. Basically, it seems, it doesn’t work. So, what was previously announced as an essential bit of kit in the arsenal against the pandemic has now been relegated to an afterthought which might be ready by the end of June. Again, it’s difficult to see how you could make this stuff up.

The real news this week, though, has been the revelations that Dominc Cummings, Boris’ chief adviser and the real power behind the throne, broke all the lockdown rules of which he was the chief architect. When his wife came down with symptoms instead of self-isolating at home as the law stated, he came home from Downing Street to check on her and then went straight back to Downing Street thus potentially infecting dozens. He then decided to drive 260 miles to his family estate near Durham where there happened to be an empty cottage in which he could self-isolate. Stay at Home. Protect the NHS. Save Lives. That was the government mantra. So, Cummings decided to do none of those. I dare say the tens of thousands of folks who obeyed the law would have loved to have been able to hunker down in their family estate 260 miles away.

We always knew there was one set of rules for the masses and another for the establishment elite (after all, Boris has three homes in which he can hide away). The real kicker though is when he decided to drive 30 miles to Barnard Castle, a local beauty spot, on his wife’s birthday to “check that his eye-sight was good enough to drive.” Stay at Home. Protect the NHS. Save Lives.

But, come on. Who amongst us has not popped in the car to make a 60 mile round trip, with our wife and 4-year-old child, to check that our eye-sight was up to scratch?

And neither Boris nor Dom can see that he did anything wrong. Amazing. You really cannot make this shit up.

. . . perhaps the government would be wise to downplay its obsession with all things “world-beating”. It would be an odd choice of phrase at the best of times, implying a sort of relish at having whupped countries with less money or worse healthcare options. But during these suboptimal times, where plenty of other countries with less money and much worse healthcare options have performed far more successfully than us, it tips over into state-sponsored delusion. The UK has the second highest rate of excess deaths from the coronavirus pandemic in the world. In the WORLD.

More virtual visits from the National Garden Scheme this week. This clip is a short one from Goodnestone Park, Kent.

And, finally, a couple of cartoons which caught my eye this week: