Lockdown week 15. A week much like all the others, you will be surprised to hear. A fairly overcast and breezy week with some rain and some sunshine – what are the chances of that? It rained all day Thursday and much of Friday which was excellent. And, it was exactly the sort of rain the garden needed – persistent and consistent without the torrential deluge which has been a characteristic of recent weeks.

A few weeks ago towards the end of one of the hot sunny days we had Penny and I went up and reclined in the hammock for a spell. Wine glasses in hand, I remember listening to the birdsong and thinking “I really ought to record that for posterity.” So I did. I then forgot about it for about five weeks until accidentally discovering it again the other day. The sigh of contentment at the end sums it up perfectly.

We had a lovely walk around the Edgcote Estate on Monday. This is one of our favourite walks and one we used to particularly enjoy when we lived in Byfield – it’s only a couple of miles down the road and the dogs loved it – it provided them with at least three opportunities to dive in the river.

At the weekend one of our neighbours posted a few photos on Facebook of a splendid field of poppies on, you guessed it, the Edgcote Estate. We asked them where exactly it was and, armed with that information, set off to find it for ourselves. The results speak for themselves. 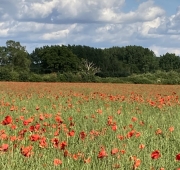 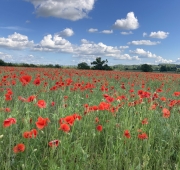 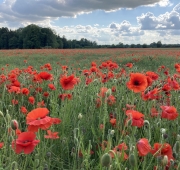 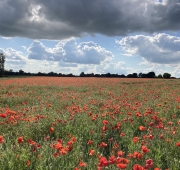 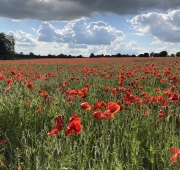 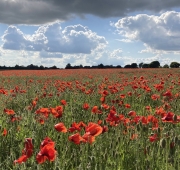 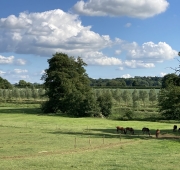 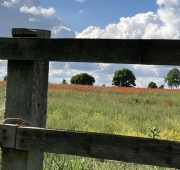 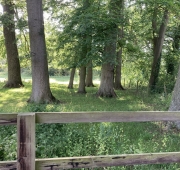 Sadly, the white elephant that is HS2, the new high speed railway, is going to plough right through the middle of this field so the farmer has ceased doing anything with it, hence the glory that are the poppies. The project to build HS2 has been decried by just about everyone as almost completely useless and unnecessary but, even with a price tag of £100 billion (and rising), the government refuses to stop it. A colossal waste of money which could be used to pay off some (a fraction, admittedly) of the coronavirus debt we are wracking up. It’s rather like looking at your gazillion pound overdraught at the bank and then rushing out to buy a brand new Ferrari when you still have a perfectly serviceable Toyota in the garage. Not something that most rational, sane people would do. But, of course, we are talking about the government.

On Tuesday we went across to Adam and Ava’s and had a lovely socially responsible picnic in their back garden. Jessie was very good about maintaining her distance for the most part. Naturally she has no trouble staying several metres away from me but she did get a bit close to Grandma a few times – all she wanted was a hug! And all we wanted to do was to give it to her. I do wonder sometimes what impact all this will have on children her age and how long it will be before we can wrap her in our arms again.

Even though they are gradually re-opening their sites, the National Trust and the National Garden Scheme continue to post new videos. This latest one is from the walled rose garden at Mottisfont in Hampshire, which has roses dating back to before 1900.

Sadly, theatres won’t be opening anytime soon so it was good to see that the National Theatre at Home announced six more free streamings. Worryingly, these were described as the six final free streamings – have they run out?

And finally, to this week’s roundup from the “You Couldn’t Make It Up” department.

The government confirmed their intention to compound the errors they’ve made with the Coronavirus with their leap of faith in Brexit. They announced last week that they would not, under any circumstances, seek an extension to the Brexit transition period which ends at the end of the year despite there having been almost no progress in negotiating a trade deal so far. In other words, they are determined to crash out of the EU with no future arrangements in place.

Rafael Behr had an excellent article in the Guardian early in the week. The title sums it up: Incompetence is a built-in feature, not a bug in Boris Johnson’s government

When the qualification for being a member of the cabinet is loyalty to bad ideas, it is no surprise Britain is badly governed

And the OECD (Organisation for Economic Cooperation and Development) highlighted what seems pretty obvious to everyone apart from the government.

Britain’s economy is likely to suffer the worst damage from the Covid-19 crisis of any country in the developed world, according to a report by the Organisation for Economic Cooperation and Development.

And this is before the effects of a no-deal Brexit are taken into account which many estimated, before the pandemic, would hammer the UK’s GDP by up to 15%. Almost unimaginable that one could be so reckless.

While everyone has been commenting on how useless the government has been, the Editor of the Lancet was actually quite restrained.

And, I’m sure the irony of New Zealand’s coronavirus situation won’t have escaped your attention. Having had no new cases and lifted restrictions, a new outbreak was introduced into the country by two visitors from the UK.

Nope, you could not make it up

And finally, this from Tim Wyatt made me laugh. It’s the sort of thing I would do.