And so, another quiet week passes quietly by. The twice weekly medication distribution around the village are the highlights of our week. Other than that, it’s like playing this version of Monotony which a friend shared with us.

I have mainly been occupying the light blue-coloured Lounge-related properties and I have options in on each of the four toilets (although I might let Penelope have one for herself).

We had a village wide Burns’ Night celebration last Friday as I mentioned in passing last week. This was organised by the Garden Club and although I have to say the meal was certainly nothing to write home about, the sense of sharing it with other villagers made it somewhat special. The meals are provided by a local catering company who, in “normal” times would be catering weddings and other large gatherings. They deliver the pre-cooked meals during the afternoon – all we have to do is to warm them up and, at the appointed time, join a Zoom gathering of all those participating. The Garden Club also delivers some “goody bags” with some fun quizzes which we try to complete during the meal as well as two mini-bottles of red wine (which we had no trouble completing).

This time we also shared our meal with a friend in the village who is on her own – after the community gathering we Facetimed with her, propped the laptop on the dining table and enjoyed a lovely evening together. Not quite the real thing but perhaps a tolerable substitute.

Early in the week we had our first real snow of the season – I guess we had about 10 to 15 cm – and the temperatures turned icy cold. Thankfully, nothing to bother us although the drive to the medical centre on Tuesday to collect the village medication was a bit more exciting than normal. 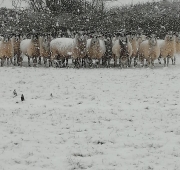 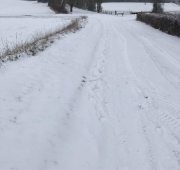 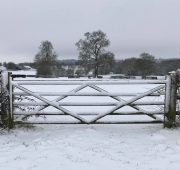 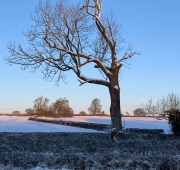 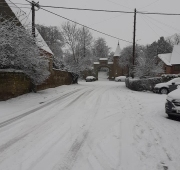 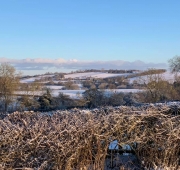 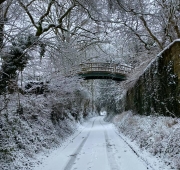 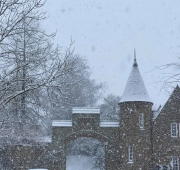 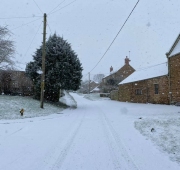 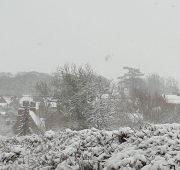 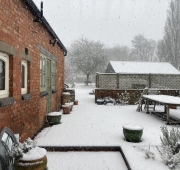 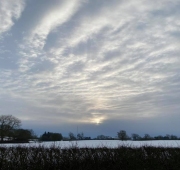 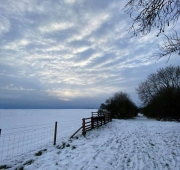 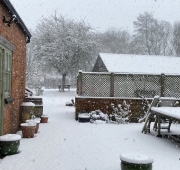 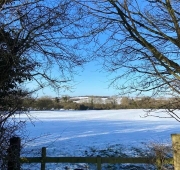 Not surprisingly, Penelope’s bird feeders have become amazingly popular during the cold weather. She provides two tree-hung feeders, a fat ball or two as well as a generous helping of ground feed for the larger birds. The Jackdaws can’t decide whether they should be ground feeders or whether they should swing precariously from the feeders themselves and so spend about half their time doing both.

One morning I did see our neighbourhood Greater Spotted Woodpecker hanging from one of the feeders and making himself quite at home. Various villagers have posted photos of woodpeckers from time to time, (perhaps this same one), although we had never seen him in our garden before. And, last Friday morning I spotted the welcome return of Mrs Pheasant whom we haven’t seen since last summer. (As Penny pointed out, it may not be the original Mrs P but a replacement). No sign of The General so far.

This week’s bike rides have taken me to the top of both the Grimsel Pass and the Furka Pass in Switzerland, both of which were unrelenting slogs up to the top. Sadly, one doesn’t get to enjoy the downhill – I could certainly do with a leisurely coast down the winding mountain roads but the bike workout seems to feel that getting to the top is sufficient!

Unfortunately, the days when my bike workouts were filmed were cloudy and indeed rainy at times so I did not get to “enjoy” quite the magnificent views of the film above.

During my workouts and especially when looking for a video to share I found myself foolishly day-dreaming about going to Switzerland and completing these climbs for real. Thankfully, that nonsense vanished in a heartbeat. And, in any event, I’d probably do better at being the drone pilot than drearily cycling up the mountains.

The UK passed 100,000 deaths from Covid-19 earlier this week. An unimaginable and unforgiveable catastrophe, especially when the PM stands up and declares that “We did everything we could . . . to minimise loss of life.”

I suppose one might argue that Trump’s denial of the severity of the virus and his subsequent neglect of any meaningful action might be worse than Boris’s incompetence but I don’t think so. It’s almost as if Boris is a sleeper agent for the virus, locking down too late and unlocking too early, encouraging families to mix at Christmas and then sending children back to school for one day. As someone said several months ago – Boris had to make the difficult decision whether to save lives or save the economy. He decided to do neither.

There was an article in the Guardian by Devi Sridhar which outlined in very simple terms how the UK missed the boat at every opportunity.

And, the article doesn’t mention the disastrous decision taken by the government early on to move elderly patients out of hospital and into care homes (to free up space in hospital for all the Covid cases) without giving them a Covid test.

I have to say, this stuff seems pretty blindingly obvious. In spite of promising “world-beating” responses to the virus, this is the only area where Boris can indeed claim to be world-beating. We have the fifth highest number of deaths in the world behind only the US, Brazil, Mexico and India, all of which have a population between three and twenty times larger than that of the UK.

And so to Brexit which just keeps on giving. The latest is that companies are now being advised by the Department for International Trade to set up a business presence in the EU in order to be able to continue to trade efficiently with Europe. I’m not sure moving business to the EU with its associated job losses in the UK is exactly what the looney Brexiteers had in mind? But, at least we have our sovereignty back.

Certainly, one group doing well out of Brexit is the Dutch – with British companies desperately looking for warehouse space in the EU.

Someone shared a link on Facebook to Trees Online in the week – the front page of their web site now includes the following declaration:

Two amusing cartoons I found this week, both of which feature (in one way or another) my beloved Ms Playchute:

And finally, our Ava completed another Open University module – we are so proud of her!

Meanwhile, keep happy, keep smiling, keep isolating as much as you can, wear a facemask when you go out and keep your distance. And keep safe.