Another great week – our first “proper” evening’s entertainment with “real” guests in the new kitchen, a new approach to our “award-winning” sourdough, a trip up to London for an exhibition followed by a minor mishap and some remarkable customer service from an online supplier.

For almost a year now we have been unable to reciprocate the numerous drinks parties, dinners and other forms of entertainment in which our friends and neighbours have been kind enough to include us. Ever since the building work started we have been completely inhospitable.

Christmas, of course, we had Nick and Adam and their families to lunch and just previously we entertained our good friends Sue & Dave and Sue & Stuart. However, last Saturday was our first “proper” dinner party with “real” guests – some friends from the gym who had given us a lovely dinner some months ago and another set of friends from the gym, one of whom happens to be the architect of the whole project. All were very impressed with the new kitchen and equally if not more impressed with the quality of the meal they were served. I believe there were several exclamations of delight for Mom’s Pecan Pie accompanied by Greg’s Liquorice Ice Cream!

Many of you know that Nick is my sourdough mentor. He started making sourdough bread, gave me my initial starter and has tutored me along the way. My award-winning sourdough is the result – three times first prize winner at the Moreton Pinkney Annual Harvest Exhibition. (Entirely because no one else enters the sourdough category).

For Christmas he acquired a new book describing a slightly different approach which he suggested I try. Why not? I am constantly searching for ways in which to improve. My first attempt with his new method produced an impressively dense and solid loaf roughly the weight and dimensions of an Olympic discus. Too wet in the making. My second attempt was better but still a bit too dense. Finally, the third effort produced a loaf which was pretty good – tasty and chewy with an excellent crust. 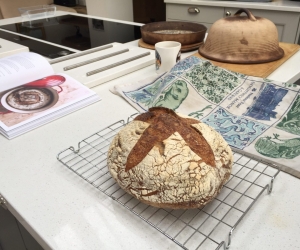 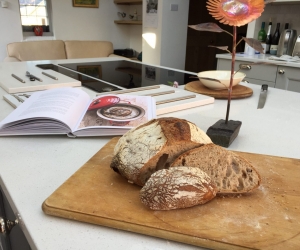 There is still considerable room for improvement but I think I’m getting the hang of it. Keep your fingers crossed and watch out for further updates.

Thursday we had a great day out – we went to London to see the Bridget Riley exhibition at the Hayward Gallery. I’ve always been a bit of a fan of Bridget Riley and the exhibition was enthusiastically recommended to us by friends. So, we trotted up to town to see it. And am I glad we did! It was fabulous.

There was a great collection of her pieces including some of her early fine art paintings and drawings, sketches, plans and “cartoons” for many of the pieces in the show. Also, some pointillism pieces a la Seurat.

It was fascinating to trace her development over time – some of the paintings are truly mesmerising. Sorry that the following don’t begin to do them justice – you’d be better off Googling them yourself.

The Hayward Gallery is conveniently situated on the south bank of the Thames a mere stone’s throw from one of our all-time favourite eateries, Wahaca. I’ve written about Wahaca in the past – the original restaurant just by Covent Garden was founded by the 2005 MasterChef winner Thomasina Miers and the brand has been very successful. It serves Mexican street food which is simple and delicious and every time we have an opportunity to visit we come away delighted. From the original restaurant there are now 25 all over the country – I shall try to make it my mission to visit each one.

We got back to Banbury at about 5.30 and it was there we ran into our unfortunate mishap – during our outing someone had stolen the catalytic converter off Penny’s car! Quelle merde! The car was in the multi-storey station car park which is riddled with CCTV cameras but no one noticed anything untoward – the security guards were too busy sleeping, I imagine. Of course, we didn’t notice anything until we started the car – the sound of a regiment of tanks rolling through the car park was enough to make us stop and summon the Recover Man. As soon as he arrived he glanced at the car and said, “Oh, a Toyota. I’ll bet I know what’s wrong.” And, he was right. The catalytic converter was gone and we faced the inconvenience of dealing with the police (to get a crime number) and our insurance company to arrange to get the car fixed. We also had to drive the tank home much to the bemusement of any pedestrian within a three-mile radius.

I now know considerably more about catalytic converter theft than I probably ever wanted to know. The Recovery Man said that Toyota hybrids, like Penny’s, are particularly sought after as they contain a batch of precious metals including rhodium, platinum and palladium. Even better, since it’s a hybrid the converter is less likely to corrode making it even more valuable!

We did have a bit of surprisingly good news in the week – we had an outstandingly satisfying customer service experience with an online retailer. Who would have imagined such a thing was possible?

We ordered three new bar stools for the new kitchen, and very nice they are too. However, as we put them together it was clear that one was a bit faulty – the lever which controls the height of the seat was dangling loosely at the side of the seat when it should have been held rigidly in position. I had assembled all the stools before we noticed and, unfortunately, once the bits are put together they do not come apart easily. I was beginning to scratch my head thinking about how I might get the faulty stool back to the supplier – this was going to be a pain.

In the meantime, Penny and I had both decided that two stools would be sufficient – there really wasn’t enough space along the kitchen island to have three stools comfortably. So, as well as returning the faulty stool we would like a refund rather than a replacement, please. Imagine our surprise (and delight) when the supplier agreed to a refund and told us that since we could not easily disassemble the stool we were free to keep it, dispose of it or donate it to a third party. Having then had a closer look at the faulty stool I saw how I could repair it fairly easily – a long screwdriver and the use of a gentle persuader, i.e., a hammer – and in a matter of moments we had a functioning third stool. Win, win. I wouldn’t recommend this as a means of securing a 3 for 2 deal from your local online merchant, however.

By this time next week we shall be well and truly Brexited. I thought Andrzej Krauze’s cartoon in the Guardian was quite cute – the whole of Europe mesmerised by Brexit and Megxit. It’s like watching a disaster movie/reality show – live.

Need a bit of cheering up? Have a look at Jessie describing a few aspects of her day at school.