Here we are again – lock-down, week 8. We’ve finally had the rain which the forecasters have been promising and very welcome it is too. I think we could have done without the 10 degree drop in temperature, however.

On one of the last sunny days before the monsoon arrived I finally persuaded Ms Playchute to cut my hair. As I joked to the neighbour over the garden hedge, my hairdresser came to visit and, as well as trimming my flowing locks, we had a great conversation:

“Going on holiday this year, sir?”
“Yes, I thought I might visit the top end of the garden this year.”
“Oh, that sounds lovely – have you been before?”
“Oh, yes, many times, and I’ve always enjoyed it.”

I would share a photo but Penny says I look like a criminal. So, what else is new?

We watched the NT at Home performance of Frankenstein on Friday night with Benedict Cumberbatch as the monster. Oh. My. Goodness. What a performance! Astonishingly good. I think you could almost say that Penny & I were shell-shocked at the end at how fabulous it was. Interestingly, there are two versions, both of which are available to view for the next week. The two principal actors, Benedict Cumberbatch and Jonny Lee Miller, alternate roles each performance – one plays the Monster and the other the Creator and then they swap around. I cannot imagine how challenging that would be but I guess it worked. As you watch it think about what it must have been like to see it live in the theatre. Oh. My. Goodness, indeed!

I finally finished reading Hilary Mantel’s The Mirror and the Light the other night. I loved it but it is right in my wheelhouse – a well researched and well written history of a fascinating period in English history. If you haven’t read the first two, start with those – Wolf Hall and Bringing Up the Bodies. And don’t give up! Her writing and language is just wonderful. This one is a monster – 882 pages – and the physical book itself is far too heavy for me to hold in a reclining position so I got the Kindle version as well. And, another advantage of the Kindle version is that you can easily look up all those words you’ve never run across before.

As an aside, some of you know that I amuse myself from time to time by investigating and researching our family tree. I was fortunate enough to be given copies of my father’s efforts (which he took over from his mother) and an extensive family tree of my mother’s side of the family from her brother. I’ve combined the two and, with the wonder that is the internet, have extended the family tree back to the 13th century.

Along the way I discovered that we are connected to royalty, both British and European royal families along a number of different branches. But, as someone said, “Aren’t we all?” And, indeed, if one is connected to one royal family it’s likely, because of their propensity for inbreeding, that one is related to them all. Such is the case in our family.

The reason I mention this in passing is that the day after I finished The Mirror and the Light I ran across a connection to Margaret Pole who features large in the book. She was the mother of Reginald Pole who was an English cardinal of the Catholic Church and therefore much at odds with Henry VIII and Thomas Cromwell when Henry divorced Catherine of Aragon and declared himself head of the church in England. Henry and Cromwell wanted him brought back to England, tortured and executed but he spent the period of Henry’s reign out of their reach in Europe serving the Pope and the Holy Roman Emperor, Charles V. After Henry’s death he returned to England and served ultimately as Archbishop of Canterbury as well as one of Mary Tudor’s chief advisers during her persecution (and burning) of Protestants. Thankfully, we are connected to him only by way of marriage.

We’ve enjoyed several lovely walks this week, much as in previous weeks, you will be surprised to learn. It’s always fun to wander through the fields with sheep and lambs – the babies are at their most adorable as they gambol and leap about. We watched three youngsters chase each other around a tree – round and round and round again until one decided to go the other way. A moment’s hesitation and then off they would go again. We could have watched for hours. We also saw a red kite low in the sky which then dropped like a stone to the ground after some prey. Sadly for the kite but thankfully for the prey, it came away empty-handed on this occasion.

Last Saturday night we enjoyed a delivery of Tapas from a local events catering firm looking to fill out their empty schedule. It was good but . . . it was mainly meat so I was fine but Penny felt a bit short-changed. It was also expensive for what it was so we probably won’t be doing that again. Still, it was nice for a change with the added bonus of no cooking (other than warming the dishes up).

We had an e-mail in the week from the Royal Academy of Arts alerting us to the premiere of their film of their Painting the Modern Garden exhibition. We went to the exhibition when it was on a few years ago in London and it was outstanding – Monet, Matisse, Renoir, Pissarro, all my favourites. The exhibition took the garden as its starting point and there were some absolutely stunning works of art on display.

The film of the exhibition will be up later today on their YouTube channel (17.00 our time, noon on the East Coast). Although it’s an hour and a half it’s definitely worth a watch.

Penny’s sister J sent us link to another virtual studio tour. This time it’s Gerard Burns, a Scottish artist. You can find out a bit more about him at the Loch Gallery web site and the actual tour itself is here.

Every Thursday evening for the past several weeks we and the entire village and the rest of the country show our appreciation for those front-line workers who put themselves at risk to care for those in hospital or care homes. This takes the form of a prolonged applause, banging of pots and pans, whistles and bells, etc. This week we had another initiative to recognise and show our appreciation for those who support us in these strange and difficult times. Each household was encouraged to download and/or draw some sort of picture showing their appreciation for their post person, in our case a lovely young woman named Christine. Rain or shine, snow or sleet she delivers our post with a smile and a cheerful “hello.” We thought we would ask Annabelle and Jessica to help so I downloaded some of the templates for colouring in and they both came up trumps. Jessica noticed that the image I had downloaded from the Royal Mail site had only six bands for the rainbow. She pointed out that rainbows have seven bands, as any fool would know! So, she added the seventh herself. 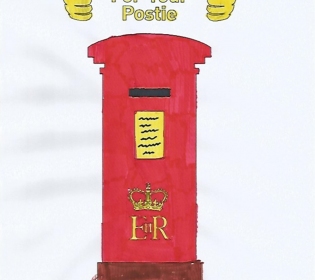 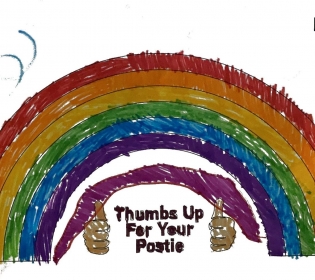 Did you see the alignment of the Moon and Venus earlier in the week? This time, I actually did! But the photo I took was nowhere near as good as this one from a Facebook friend.

And, on the last fine day last week before the rain started I managed to grab a few photos of the apple blossom in the orchard. The plum, cherry and pear blossom has largely gone but now the apple is putting on a show along with the lilac and a Montana clematis.

And finally, I should have included this a week or so ago when the weather was so lovely . . .

Oh, to be in England
Now that April’s there,
And whoever wakes in England
Sees, some morning, unaware,
That the lowest boughs and the brushwood sheaf
Round the elm-tree bole are in tiny leaf,
While the chaffinch sings on the orchard bough
In England – now!!

And after April, when May follows,
And the whitethroat builds, and all the swallows!
Hark, where my blossomed pear-tree in the hedge
Leans to the field and scatters on the clover
Blossoms and dewdrops – at the bent spray’s edge –
That’s the wise thrush; he sings each song twice over,
Lest you should think he never could recapture
The first fine careless rapture!
And though the fields look rough with hoary dew,
All will be gay when noontide wakes anew
The buttercups, the little children’s dower
– Far brighter than this gaudy melon-flower!